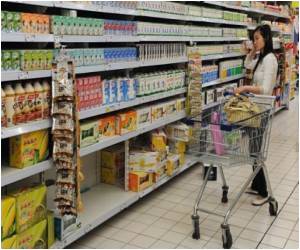 Many Japanese shoppers have lost faith in government guarantees and fear that radiation could have contaminated their diet.

Meltdowns at the nuclear plant in the aftermath of last year's tsunami sent poisonous radioactive particles into the air and water, blanketing crops grown near the power station and polluting waters where seafood is harvested.

A number of Fukushima products were taken off the official menu, with government bans on beef, milk, mushrooms and some green vegetables.


But consumers were unconvinced by the measures and began steering clear of produce from anywhere near the affected area, leaving farmers with fields full of crops they could not sell and fishermen with catches worth nothing.
Advertisement
Miwa Yokono says she would like to give locally caught fish to her one-year-old son, but does not believe it is safe.

"I want him to eat as much fish as possible because that's his favourite... but I think radiation accumulates in creatures at the top of the food chain," she said.

Yokono, 27, now buys imported fish, but says she would support Japanese trawlermen if she knew what she was buying was safe.

The problem for Yokono is that she -- along with a significant proportion of the Japanese shopping public -- does not trust the government's safety standards.

In the immediate aftermath of the nuclear crisis, Tokyo announced it was raising the permitted level of radiation in food by a factor of five, meaning produce that would previously have been thrown out was suddenly alright.

Rice grown just a short distance from the plant was declared safe after spot sampling, but later tests revealed radiation levels far higher than even the new raised limits.

Hiroaki Koide, assistant professor at Kyoto University Research Reactor Institute, said the official declaration that food with five times the previous "safe" level of radiation was fit for consumption raised suspicions the government was acting on behalf of producers, instead of consumers.

"It's too high. The government set the provisional safety standard to cope with the reality, rather than to protect people," he told AFP.

In response to public pressure, Tokyo says that from April no food will be permitted for sale if it has more than 100 becquerels of radiation per kilogramme (two pounds), down from 500 at present.

But Takashi Sato, an official at Fukushima Federation of Agricultural Cooperative Associations, said even with the new stricter cap, the Made In Fukushima brand is tainted.

"People don't believe in the government's screening system. We want the government to work to convince the public that the new cap is genuinely safe," he said.

Kunio Shiraishi, a former senior researcher at the National Institute of Radiological Sciences, said the current regime of sample inspections has been a problem for public confidence and says blanket testing is the way forward.

But he admitted this would not be easy, especially with food from the oceans.

"What is most frightening for Japanese people is radiation in seafood rather than food on earth, because we take lots of minerals from fish and seaweed," he said.

For Japan's powerful farming and fishing industries, the lack of public trust is not just a problem at home -- it is also affecting what they can sell abroad.

Exports of Japanese farm products -- once a favourite of the country's Asian neighbours who prized their safety and quality -- fell 7.4 percent in 2011 from the previous year while exports of marine products dropped 10.9 percent.

Eight countries including China and South Korea are still blocking the import of several vegetables produced in parts of northern and eastern Japan.

In a bid to regain shoppers' trust, Japan's largest supermarket chain, Aeon, has decided to ignore government guidelines and carry out its own tests on the food it sells.

Aeon vice president Yasuhide Chikazawa says setting a "safe limit" for radiation is meaningless because consumers are unwilling to accept it.

"It's only after you get radiation test results of 'not detectable' that you can compete with global producers on a level playing field," he said.

Chikazawa said that when the supermarket chain introduced its zero-tolerance policy, they encountered resistance from producers in radiation-hit areas.

"But they finally realised that this was the ultimate way of protecting them," Chikazawa said.

Acute Radiation Syndrome
Acute radiation syndrome occurs when a person is exposed to a high dose of external penetrating ......

Robot Seals Help Alleviate Depression Among Japan Tsunami Survivors
Many survivors of the tsunami in Japan are victims of depression and recently scientists have found ...

Japanese Food Extremely Popular in India
Japanese cuisine is becoming extremely popular in India, especially among the young and the health ....