Iraqi Mothers Learn to Handle a Gun to Protect Their Children 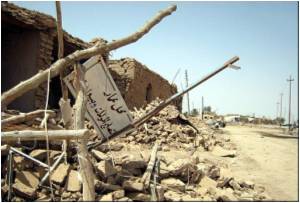 Rising to the occasion, Iraqi mothers are now moving on from holding a ladel to handling a gun, so that they can protect their children and home.

"I hate the sound of gunfire, but it is the terrorists who have forced me to learn to handle a gun to protect my children and my home," the 27-year-old mother of three says almost matter of factly, while deftly handling the weapon.

Umm Omar lives with her family in Ramadi, capital of the western province of Anbar, one Iraq's most violent regions. She is among a growing number of young mothers who have learned to use a weapon to fend off insurgents targeting the families of civil servants and security personnel.


"A few months ago, a group of gunmen tried to burgle our home," notes husband Ahmed Karim, a police sergeant whose work frequently keeps him away from home for days at a stretch.

Stress has become entwined in the current lifestyle of a young working couple and has resulted in the rise in incidence of hypertension, diabetes and psychosomatic illnesses.
Advertisement
"I was not there, but my wife's screams alerted the neighbours," the 32-year-old adds, noting that the gang fled before completing their mission. "After that, I decided to teach her how to use a pistol."

Following the US-led invasion to oust Saddam Hussein in 2003, Anbar became the centre of a vicious insurgency that was only put down after Sunni tribes and their militias sided with the US military against Al-Qaeda.

Many wives of civil servants, security personnel, elected provincial officials and journalists began arming themselves in June 2009, when insurrectionists attacked the homes of notable residents or members of the police force.

In this largely desert province where the arid plain is interrupted by meadows and orchards on both banks of the Euphrates river, the foliage provides effective camouflage for gunmen, whose weapons of choice are handguns and the AK47 assault rifle.

"As the wives of people responsible for maintaining security, we must protect our families when our men are protecting the country," says Ghada Ahmed, 24.

"It is they (the wives) who defend the home in the evenings when their husbands are away, or when they return tired from work," adds the robust mother of four, dressed in a colourful printed dress and pink Islamic headscarf.

"It was the continuous attacks that pushed us to react," she says, referring to the 10,000 soldiers and police officers killed since 2003 by insurrectionists who consider them "henchmen of the (American) occupiers."

In mid-June, a former member of the anti-Qaeda militia and five members of his family were killed in an armed night attack on his home close to Fallujah, another restive city in Anbar.

Paradoxically, in this religiously conservative region where women usually keep a low profile, the police and tribal chiefs, as well as religious dignitaries, take a positive view of women who are ready to defend themselves and their homes.

"This is an evolution toward modernity. We do not have any objection -- quite the contrary," assures General Bahaa al-Qaisi, head of the provincial police force.

"It is necessary that they (women) help us because we do not have enough police officers to protect everyone," he adds about a province where a police force of 24,000 has to look after nearly two million inhabitants.

For Adnan Khamis, a leader of the al-Bualwan clan, the bravery of the women evokes memories of Islam's glorious past.

"Seeing women carry arms is (a sign of) great nobility," he says, adding that "women always took part in the wars alongside men and held their place in history."

Even religious leaders approve of this.

"For a woman, learning how to handle a weapon to protect her children and home is inscribed in Islamic law and mentioned in the words of the Prophet (Mohammed)," said an imam of Ramadi, who did not want to give his name.

Researchers found that the prevalence of Post-Traumatic Stress Disorder (PTSD) remains high nearly two decades after the principal conflict in Liberia
Advertisement
<< Indecisiveness , a Common Train in Britain : Study
A Memory of Something That Never Happened! >>

More News on:
Height and Weight-Kids The Magic Feeling of Being A Mother