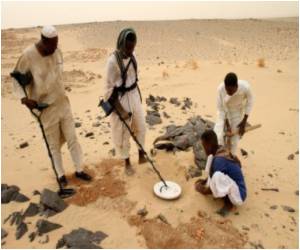 In central Indonesia where lush rainforest once stood, illegal miners on the frontline of a modern-day gold rush tear up the earth in the hunt for the precious metal.

Thousands of men use high-pressure hoses to blast tonnes of sand out of the ground daily in open pits around Kereng Pangi on Borneo island, before running it through filters to find specks of gold.

Aside from the environmental devastation, the workers there and at many similar sites across Indonesia are risking their health and poisoning communities by illegally using mercury to extract gold.


Mercury can cause serious neurological damage and gold miners who work for years burning the metal develop symptoms such as tremors and persistent coughing.
Advertisement
The situation has been described as a "health timebomb" by Professor Marcello Veiga, an expert in the use of mercury in small-scale gold mining at the University of British Columbia in Vancouver.

"They will die by the thousands," he said.

Jakarta hopes that a landmark UN convention, signed this week in Japan aimed at reining in the use of mercury, will limit supplies of the metal for miners in Indonesia and help reduce the deadly practice.

But others believe the treaty, signed near Minamata in southwest Japan where mercury pollution poisoned tens of thousands, is too weak to tackle a problem that has grown in tandem with the price of gold.

The United Nations estimates that up to 15 million so-called "artisanal small-scale gold miners" operate in 70 countries.

In Indonesia, the numbers have risen from an estimated 50,000 in 2006 to around 500,000, according to Abdul Harris, who heads a government-backed task force charged with tackling the issue.

The widespread use of mercury to extract gold has made mining the biggest single source of man-made releases of the highly toxic metal into the environment, according to the UN.

The growth in the practice is clear in Indonesia, where many who struggle to make a living are employed to crush rock ore and blast through sand at hundreds of sites in search of gold.

When mercury is mixed with the ore or sand mixture, the heavy liquid metal forms an amalgamate with the gold that allows it to be easily separated out.

It is the next part of the process that is dangerous. The mercury is burnt off, releasing neurotoxins that can cause irreversible neurological damage and harm vital organs.

"We do worry -- but we worry more about not getting enough to eat," said a gold miner, who declined to be identified, on the central island of Lombok.

In recent years, many shops where the amalgamate is burned off have had ventilation hoods fitted to suck up the dangerous fumes, but there is nothing to stop the burning that occurs in open fields.

Rini Sulaiman, an advisory board member of Borneo-based development foundation Yayasan Tambuhak Sinta, said it is hard to monitor the health of people working in the industry as many are migrant workers.

When deaths do occur, the cause is rarely recorded for this group, making it difficult to know if mercury is a factor.

However some see a greater danger for communities surrounding the fields, as the toxic metal finds its way into the food chain.

It is a particular danger when it enters rivers, as it mixes with bacteria and forms "methylmercury," which is more toxic than normal mercury.

It can build up in fish and be passed on to humans, causing serious illness and birth defects.

In Minamata in Japan, methlymercury dumped in industrial wastewater by a factory over decades poisoned tens of thousands of people, around 2,000 of whom have since died.

Sulaiman said the impact of mercury on wider communities was likely to be more serious than on the miners themselves.

"Communities that live downstream and eat fish are at high risk of developing mercury poisoning over the years," she said.

Gold mining is also wreaking environmental devastation, adding to the destruction caused to the country's rainforests by industries such as palm oil.

The damage is so widespread around Kereng Pangi that satellite photographs show the area as a huge white blotch amid lush rainforest on Borneo, a vast, biodiverse island shared between Indonesia, Malaysia and Brunei.

Gold mining has also crept into "protected" areas such as Tanjung Puting national park on Borneo, home to a large population of endangered orangutans.

A local official, speaking anonymously, said men were paying off park officials to mine gold in the park. An AFP reporter saw mining equipment lying inside the boundaries on wide stretches of deforested land.

No national programme is in place across Indonesia -- a sprawling archipelago of more than 17,000 islands where power is heavily decentralised -- to convince small-scale gold miners not to use mercury.

But Rasio Ridho Sani, deputy environment minister, insisted the government had sought to encourage miners to use alternative methods.

The Minamata Convention on Mercury would help tighten up the distribution of the metal in Indonesia, where it is not produced, he said.

"We hope that we will be able to reduce illegal imports into Indonesia."

Critics say the treaty lacks teeth as it only commits governments to reduce use of the metal, and does not demand an outright ban on the practice.

Experts in Indonesia were sceptical the treaty would make much difference in a country where gold mining with mercury is supposed to be illegal but continues regardless.

"Even if the agreement were stronger, it wouldn't really change anything on the ground here in Indonesia," said Sukoso, director of research institute the Indonesia Society of Water and Aquatic Environment, who like many Indonesians goes by one name.

"It's already illegal but very difficult to control."

He said education was the key to persuading miners to stop using mercury.

"The government could do more to inform the miners about mercury, because they've been using it for a long time and many don't understand the dangers."

People Living in Mountaintop Coal Mining Areas Have Increased Risk of Depression
The risk of a major depression is high among people who live in areas with destructive ......

Text-Mining Algorithm for Identifying Relevant Research on Chemicals and Disease for Public Database Developed
Researchers at North Carolina State University have developed a new text mining algorithm that can ....