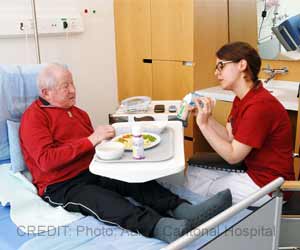 Individualized nutrition not only causes hospital patients to consume more protein and calories, but also improves clinical treatment outcomes. This has been demonstrated in a study by researchers from the University of Basel and Aarau Cantonal Hospital in the journal The Lancet.

People who struggle to eat and drink properly following an illness are at risk of consuming too little protein and energy. This phenomenon affects over a third of inpatients in the medical wards of hospitals.


Malnutrition not only reduces the hospitalized patients' quality of life; it also has an adverse impact on disease progression, increasing the risk of complications and the mortality rate.
Advertisement
Where there is a risk of nutritional deficit, guidelines recommend individualized nutrition during the patient's stay in hospital in order to guarantee their supply of protein and calories. Possible measures range from a nutritional plan to tube feeding and intravenous feeding.

Until now, the lack of meaningful studies meant that it was unclear whether individual nutrition management actually had a positive impact on patients, especially as nutritional support can also have unwanted side effects.

Now, in a clinical trial involving more than 2,000 patients at eight Swiss hospitals, researchers have examined the benefits of such nutritional support in a randomized controlled study for the first time.

For the trial, medical patients at risk of malnutrition were divided at random into two groups. One group received the usual dishes from the hospital kitchen during their hospitalization. For the patients in the second group, dieticians compiled an individual nutritional plan.

After 30 days, it was clear that individualized nutrition not only achieved a better supply of energy and protein, but also led to a general improvement in treatment outcomes. The comparison showed that fewer serious complications occurred and the mortality rate fell. Statistically, it was possible to prevent a serious complication in one in 25 people treated and one death for every 37 people treated.

"Our results show that malnutrition is a modifiable risk factor and that the therapy has a positive influence on disease progression," says study leader Professor Philipp Schütz, who is an SNSF professor at the University of Basel and head of internal and emergency medicine at the Aarau Cantonal Hospital in Switzerland.

"This study has major implications for the treatment of hospital patients with multiple morbidities and should help to reinforce the importance of nutritional therapy in high-risk patients."

Source: Eurekalert
Advertisement
<< Vascular Surgery After Firearm Injury Linked to Increased Mo...
Being too Harsh on Yourself can Lead to OCD, Anxiety >>

Individualized Diet More Effective in Managing Blood Sugar Levels
Researchers at the Mayo Clinic have reported that an individualized diet based on a person's ......

Nutrition Risk Score Helps Identify Malnutrition in Patients After Heart Surgery
The Johns Hopkins Hospital nutrition risk score may heighten the sensitivity to patients who are ......