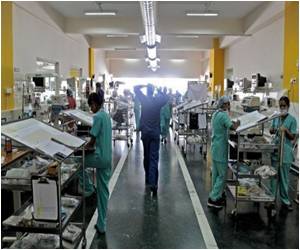 An official revealed that India and Britain have signed an agreement for cooperation in the health sector with specific focus on strengthening primary health care and technological development.

A memorandum of understanding was signed between union Minister for Health and Family Welfare Ghulam Nabi Azad and Britain's secretary for health Jeremy Richard Hunt Sunday evening at Geneva, the official said.

Describing the agreement as a historic event and a great milestone, Azad noted with optimism that this agreement is going to usher in a new era of cooperation in the health sector between the two countries.


Azad said that the agreement between India and Britain will promote wide-ranging cooperation in the health sector between the two countries and spur the exchange of information and expertise for the common good of people.
Advertisement
Some of the focal points of the agreement were promoting exchange on health-care policy in India and the Britain, human resources for health, regulatory issues, health technology development, primary health-care and strengthening of public infrastructure and capacity, the official said.

India has been a recipient of Britain's bilateral assistance in the form of grants since 1975. The aid agency of the Britain is department for international development.

The priority for the partnership has been improvement of maternal and child health and reducing the burden of communicable diseases.

The health minister noted that signing of this agreement demonstrates the commitment of both the countries to work closely with each other to further cement their strong relations.

NRHM Plans Primary Health Care Schemes in Orissa
The NRHM has been launched with the objective of providing accessible, affordable and reliable ......

Complex Patients in Woe of Primary Health Care
Americans have prolonged life but with multiple medical conditions making their health care ever ......