Incubation Period for SARS-like Virus may be Longer 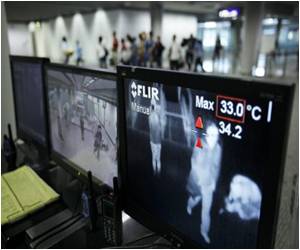 A study revealed that the incubation period of the SARS-like virus that has killed 27 people globally, mainly in Saudi Arabia, may be longer than previously thought, requiring longer quarantine.

The Middle East Respiratory Syndrome coronavirus (MERS-CoV) may have an incubation -- the period between infection and symptoms -- of nine to 12 days, longer than the one-to-nine day period previously observed.

This finding had "important implications for the duration of the quarantine required to rule out infection among contacts" of the patient, said the study in The Lancet medical journal.


People who return from the Middle East with respiratory ailments, or who had been exposed to a confirmed MERS case, should be isolated, said the team and recommended a period of at least 12 days to confirm they were clear of the virus.
Advertisement
A team of researchers had examined two French MERS patients for the latest study.

One, who has since died, was apparently infected while travelling in Dubai, and the second seems to have caught it while sharing a hospital room with the first -- before doctors detected the virus.

Earlier Wednesday, the World Health Organisation said the global death toll from the MERS virus had risen to 27 after three patients died in Saudi Arabia and one in France.

The disease is a cousin of Severe Acute Respiratory Syndrome (SARS) which sparked a global health scare in 2003 when it leapt from animals to humans in Asia and killed some 800 people.

Like SARS, the new virus appears to cause a lung infection, with patients suffering from a temperature, cough and breathing difficulty. But it differs from SARS in that it also causes rapid kidney failure.

Health officials have expressed concern about the high death rate of about 50 percent, warning the disease could spark a new crisis if it acquires an ability to spread easily between humans.

In the study, the authors say the occurrence of "clusters" of infection was a worrying development.

"It might result from adaptation of the virus to inter-human transmission," they wrote.

SARS-like New Virus Could Be 'Threat To The Entire World': WHO
A new virus, similar to the dreaded Severe Acute Respiratory Syndrome (SARS) virus, and has termed ....