Women dressed in stark black, their faces veiled and their hands sometimes gloved, are becoming a common sight in Cairo, a trend that worries the government as it battles a lurch towards fundamentalism.

No Rolling Up Sleeves Even for Hygiene, Says UK Muslim Woman Radiographer and Loses Job

No rolling up sleeves even for hygiene reasons, sorry, said a Muslim woman radiographer in UK and chose to lose her job.
Advertisement 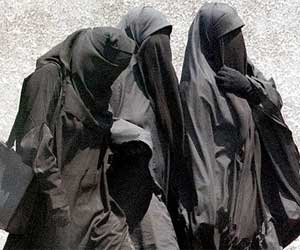 Women in Egypt wearing the niqab 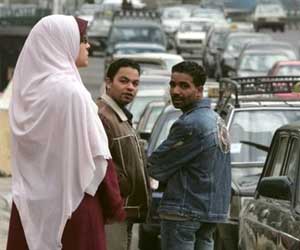 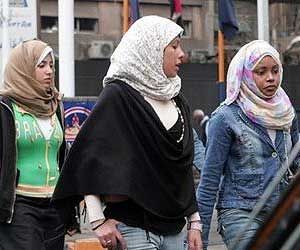 Women outside a university campus in Cairo 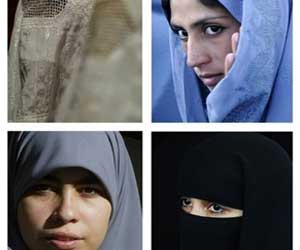 A combination picture shows women wearing a Burqa (top L), a Tchador (top R), a Hijab (down L) and a Niqab

The issue has been brought into sharp focus following reports this week that Mohammed Tantawi, head of the Islamic Al-Azhar University, told a girl to remove her niqab when he toured a high school funded by his institution.


Tantawi, the country's top religious authority, reportedly also said that he intends to ban the niqab at the university.

The ministry of religious endowments has distributed booklets explaining that wearing a niqab is un-Islamic while the health ministry wants to ban doctors and nurses from wearing the austere veil.

North Korean women face hard labor if they are caught wearing trousers rather than skirts, under the communist regime's latest crackdown on public morals, South Korean activists said Friday.
Advertisement
A decision has also reportedly been taken to ban students from wearing the niqab in the residences of the state-run Cairo University, although the university authorities deny this is the case.

Outside one the university's female residences, students said they had been stopped at the gates when they tried to enter wearing face veils.

"I don't understand their point of view. If it's for security, we can lift the niqab for security and show them our IDs," a student, who gave her name only as Heba, told AFP.

Three veiled students huddled together nearby reviewing a complaint to the university that they had written and planned to lodge.

A security guard said he had been ordered to bar women from entering the residence wearing a niqab, even if they showed their faces for identification.

"From a security standpoint, the niqabs weren't a problem for us," he said. "They would show their faces when asked. I was surprised by the decision.

"If you want reasons, ask the education ministry," he said.

The education ministry denied there was a ban. "There is absolutely no ban against students wearing the niqab," said ministry spokesman Adli Reda.

He said the orders were to have the students show their faces when asked for identification, because several men were caught last year sneaking into the residence wearing the niqab.

A university spokesman also denied there was a ban on niqabs.

Hossam Bahgat, of the rights watchdog the Egyptian Initiative for Personal Rights, said however he had received complaints from students who had been banned from entering Cairo University residences because they were wearing the niqab.

Bahgat said there was a tendency to ban students with known opposition leanings from living in residences, especially those affiliated with the banned Muslim Brotherhood, the country's largest opposition group.

The niqab, however, is not usually associated with the Muslim Brotherhood, which advocates a peaceful transition to an Islamic government through elections.

Supporters of the niqab say wearing it brings women closer to God, and that they should be allowed to choose their own dress.

The majority of mainstream Muslim scholars -- who agree a woman must cover her hair -- say the niqab is unnecessary.

It is commonly associated, in the Middle East, with followers of Salafism, an ultra-conservative school of thought mostly practiced in Saudi Arabia.

Salafism has much in common with the ideology of Al-Qaeda chief Osama bin Laden, but most of its practitioners shun politics, putting the emphasis on spreading the puritan creed of emulating the practices and beliefs of early Muslims.

Analysts say the niqab trend is a source of concern not only for the government but for Al-Azhar as well.

Egypt has over the years witnessed a series of large-scale attacks by fundamentalist militants, starting with the assassination of president Anwar Sadat in 1981.

This year, it arrested two cells of Islamists blamed for a bombing in a Cairo bazaar that killed a French teenager, and a botched jewellery store heist that killed four Christian Copts.

"There are government concerns about Salafism," said Diaa Rashwan, an expert on political Islam with the Ahram Centre for Political and Strategic Studies.

"There is a secular trend in government, and the niqab is against that," Rashwan said. "And Al-Azhar has always had a cautious dislike towards other trends that challenge its legitimacy."

Al-Azhar has long enjoyed a reputation as Sunni Islam's most eminent source of learning and religious edicts. Many Salafists however view Al-Azhar's theological teachings with contempt.

College Girls In Kanpur Furious Over Dress Code In Campus