In US, Whooping Cough Vaccine Antigen Disappearing from Bacteria 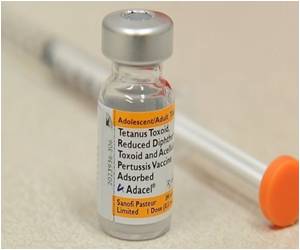 Three to five protective antigens are present in vaccines for whooping cough, the presence of which are critical to the vaccine's effectiveness.

But one of the antigens, pertactin, which had been present in almost all isolates of Bordetella pertussis in the US as late as 2010, is now absent from more than half of them, according to a paper published ahead of print in Clinical and Vaccine Immunology.

"These findings tell us that there is an evolutionary advantage to lacking the protein that may have important vaccine implications," says first author Lucia C. Pawloski, of the Centers for Disease Control and Prevention, Atlanta, GA.


In the study, the researchers screened 1,300 isolates dating from 1935-2012, obtained from outbreak and surveillance studies. They used polymerase chain reaction (PCR) to identify DNA insertions into the pertactin gene, which prevents expression of that gene. The earliest such isolate was from 1994, and the next, 2010. There were 267 such isolates.
Advertisement
Thanks to the vaccine's other antigens, the vaccine remains effective, but that does not mean public health authorities should be complacent.

"This recent and drastic change in response to a particular vaccine antigen highlights the need to continue monitoring the circulating bacterial population to allow us to better predict future potential vaccine antigens and respond to the recent upsurge in pertussis," says Pawloski.

It is particularly important that pregnant women be vaccinated against pertussis, since infants are at greatest risk for having severe, potentially life-threatening complications from pertussis.

"After receiving this vaccine, a pregnant woman's body creates protective antibodies and passes some of them to her baby before birth," says Pawloski.

Those antibodies provide the baby with some protection that lasts until it is old enough to be vaccinated. However, fewer than 10 percent of pregnant women are being vaccinated.

Pertussis is resurgent in the United States. More than 48,000 cases were reported in 2012, up from less than 8,000 in 2000. Prevalence peaks cyclically, every three to four years, and the former number may reflect a peak, but the general trend has been strongly upward since before the millennium.

The rise in cases may be due to more sensitive and specific diagnostics, better awareness of the disease among both doctors and the general public, and waning immunity from the current acellular vaccine. Although some people do not get their children vaccinated, and such children are at least eight times more likely to get the disease than those who receive all five recommended doses they are not the driving force behind the large scale outbreaks or epidemics, says Pawloski.

Recommended Reading
Undervaccination Associated With Increased Risk of Whooping Cough: Study
In children of 3 to 36 months of age, undervaccination with the diptheria, tetanus toxoids and ......

Whooping Cough in Childhood Connected to Premature Death
People born during whooping cough outbreaks are more likely to die prematurely even if they survive ...

Whooping Cough's Resurgence Don't Stand Up to Scrutiny
In recent decades, whooping cough has exploded in the United States and some other developed ......

Coughing up Blood Symptom Evaluation
Coughing up blood in anyone can be alarming. But it is not always serious. However, when there is re...

Vaccination for Children
Vaccines are biological products that impart immunity to the recipient. Vaccines may be live attenua...