Understanding the Global Spread of Epidemics 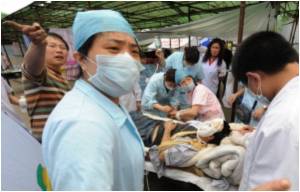 At Northwestern University, computational work conducted has led to a new mathematical theory for understanding the global spread of epidemics.

The resulting insights could not only help identify an outbreak's origin but could also significantly improve the ability to forecast the global pathways through which a disease might spread.

"With this new theory, we can reconstruct outbreak origins with higher confidence, compute epidemic-spreading speed and forecast when an epidemic wave front is to arrive at any location worldwide," said theoretical physicist Dirk Brockmann, who developed the ideas for this research at the Northwestern Institute on Complex Systems (NICO). "This may help to improve possible mitigation strategies."


Brockmann, currently a professor at Berlin's Humboldt-Universitaet, worked with fellow scientist Dirk Helbing, a professor at ETH Zurich, to develop the theory. Brockmann was an associate professor of engineering sciences and applied mathematics at Northwestern's McCormick School of Engineering and Applied Science before moving to Germany this year.
Advertisement
Their study will be published Dec. 13 in the journal Science.

Brockmann and Helbing's new approach for understanding global disease dynamics is based on the intuitive notion that in our strongly connected world, conventional geographic distances are no longer the key variable but must be replaced with "effective distances."

"From the perspective of Frankfurt, Germany, other metropolitan areas such as London, New York or Tokyo are effectively not more distant than geographically close German cities such as Bremen, Leipzig or Kiel," said Brockmann, who also has a joint appointment at the Robert Koch Institute in Berlin.

When an unknown virus emerges at various locations in the world, scientists focus on answering the following questions: Where did the new disease originate? Where are new cases to be expected? When are they expected? And how many people will catch the disease?

In order to contain the further spread -- and potentially devastating consequences -- rapid assessment is essential for the development of efficient mitigation strategies. Highly sophisticated computer simulations, which attempt to predict the likely epidemic time-course and spreading pattern, are important tools for forecasting different scenarios.

Such computer simulations, however, are very demanding in terms of computer time. They also require knowledge of disease-specific parameters that are typically not known for new, emergent infectious diseases.

In their work, the researchers show that effective distances can be computed from the traffic intensities in the worldwide air transportation network. "If the flow of passengers from point A to point B is large, the effective distance is small and vice versa," Helbing explained. "The only thing we had to do was to find the right mathematical formula for this."

With this type of mathematical foundation, Brockmann and Helbing can visualize the geographic spread of past diseases, such as SARS in 2003, or influenza H1N1 in 2009. Formerly complex dynamic patterns with no apparent structure thus turn into simple, concentric and regular wave patterns. These patterns can be easily captured mathematically.

"In the future, we hope our approach can substantially improve existing, state-of-the-art models for disease spread," Brockmann said.

The title of the paper is "The Hidden Geometry of Complex, Network-Driven Contagion Phenomena."

Pandemics Being Predicted With The Help Of Transportation
Predicting the spread of infectious diseases is more complicated than ever in this world of ......

Mathematicians Developed A New Weapon In Fight Against Pandemics
To quantify the spread and infectiousness of viruses like the pandemic H1N1 flu strain, ......

Genes That Give Flu Viruses Power to Cause Pandemics Detected
Focusing on a variant of swine flu circulating in Korea, in a study researchers have discovered a .....