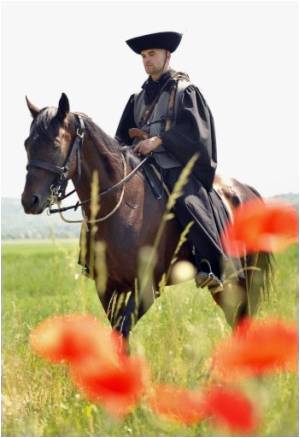 It was when La Hera ranch still lay in fields outside Mexico City that Guadalupe Pena's great grandparents began working with horses.

Now it is surrounded by graffiti-covered walls and barred windows but, behind its metal gate, offers hope where hospitals have failed.

After Pena was partially paralysed by a stroke seven years ago, horses helped her to recover as she experimented with hippotherapy, deriving from the Greek word "hippos," meaning horse.


She discovered the therapy -- in which the motion of the horse's body stimulates the patient's muscles -- shortly before she fell ill.

"We've lived with horses all our lives so it was the opportunity to apply it all," Pena told AFP, as she prepared one of five dedicated horses -- chosen for their patience and trained to avoid reacting to emotions -- to receive six-year-old Citlalli Lopez.

Rabies is a zoonotic viral disease which affects domestic and wild animals.
Advertisement
Pena, who studied psychology, treats all kinds of patients from severely disabled children to arthritic 80-year-olds.

Many bring their children as a last hope for help with conditions from cerebral palsy to advanced cancer or spinal cord injuries.

"Patients come here because they've been rejected by other places due to the severity of their problem," Pena said.

Surgeons doubted whether Lopez would survive a first operation for a malignant brain tumor and cyst three years ago.

She has now had 10 operations and can no longer speak and barely move.

Pena slowly turned Lopez to lie in different positions across the horse's back, as it stood calmly in the dusty arena.

The horse's body temperature is slightly higher than that of a human, helping the visibly tense Lopez to relax.

Pena then stretched her arms in the air, sitting behind her on the horse's back and encouraging her to adjust her hips to keep her balance.

"Hippotherapy has been shown to improve muscle tone, balance, posture, coordination, motor development as well as emotional well-being," according to the American Hippotherapy Association.

Sessions at La Hera cost around 10 dollars, which is costly for the mainly poor families who come here, but they are still enthusiastic.

Adriana Lopez said it was the only treatment to show positive results for her daughter.

"This hand was really hard," Lopez said, holding her daughter's palm in her own after the last session. "She always kept it bent downwards, and tight. It was really hard for us to stretch it. And now it's very soft and loose."

Therapeutic riding -- a broad term for treatments including hippotherapy -- began in Germany and Denmark shortly after the World War II and later spread across Europe, the United States and Canada.

Thirty-eight countries took part in the last International Congress of Therapeutic Riding, in 2009, in Germany.

Support is now growing in Mexico, where horses have been a mainstay of rural life since the Spanish brought them to the Americas in the 16th century.

But it is not yet officially accredited here, as it is in the US or Europe.

Practitioners need skills from riding to psychology and physiotherapy, the work is emotionally challenging and the results can be small.

But Pena, whose whole family has learned to take part in therapy sessions, said she was pleased to offer something missing from Mexico's public health system.

"We're proud to know we've done something for these children to improve the quality of their lives," Pena said.

The Queen and duchess have been accused of ostentatious display of cruelty after they were seen wearing real fur.
Advertisement
<< Cold-Like Virus may be Responsible for Type 1 Diabetes
Diet Restrictions may Offer ADHD Clue >>

Sanatogen Selfie Addiction Calculator Drug Side Effects Calculator Blood - Sugar Chart Find a Doctor Pregnancy Confirmation Calculator Find a Hospital Nutam (400mg) (Piracetam) Indian Medical Journals Drug Interaction Checker
This site uses cookies to deliver our services. By using our site, you acknowledge that you have read and understand our Cookie Policy, Privacy Policy, and our Terms of Use