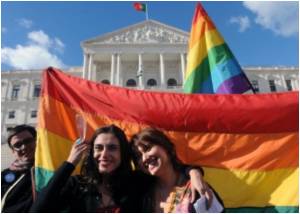 A fresh swing was taken at the Socialist government's plan to authorize gay marriage and adoption by the Catholic Church in France. The plan is to be presented as a draft law this week.

Paris Cardinal Andre Vingt-Trois, who has led opposition to the project, told mass-goers in the pilgrimage town of Lourdes that children needed both a father and a mother to build their identity.

Gay marriage supporters faced off with police in San Francisco after the California Supreme Court upheld a voter-approved ban on same-sex weddings.
Advertisement

"When we defend the right of children to build their personality with reference to the man and the woman who gave them life, we are not defending a particular position," he said.


"We are recognising what is expressed by the practises and the wisdom of all the peoples since the beginning of time and which modern specialists confirm," said Vingt-Trois at the mass during an annual meeting of France's Catholic bishops.

The northwestern US state of Washington may soon permit gay marriage after a favourable vote was cast by a renowned lawmaker.
Advertisement
The gay marriage plan is to be presented as a draft bill to President Francois Hollande's cabinet on Wednesday.

Hollande has promised that the legislation will be on the statute books by mid-2013 and there is sufficient cross party support to ensure the government will be able to push it through on schedule.

A number of European nations allow gay marriage, but not France, where only married couples and not civil union partners can adopt.

Polls suggest up to two thirds of French voters back the right of homosexuals to marry but they are split on allowing them to adopt.

Some conservative and far-right politicians have called for mass street protests to try and force the government to back down.

Hundreds of French mayors or deputy mayors have signed a petition opposing the government's plans, and Jewish leaders have joined Catholic bishops and the right-wing opposition to denounce the project.

Many of these mayors -- the officials who carry out most marriages -- have warned they will not preside over same-sex ceremonies.

Prime Minister Jean-Marc Ayrault has insisted there will be no backtracking on the pledge made by Hollande when he was campaigning for the presidency this year.

The text to be presented to Hollande's cabinet will redefine marriage to stipulate that it is "contracted between two persons of different sex or of the same sex," Ayrault told AFP last month.

The draft legislation will include provision for married gay couples to adopt children but the right will not be immediately extended to unmarried homosexuals, the premier added.

That question and the issue of gay couples' access to medically assisted conception will be addressed in secondary legislation at a later date.

The French government has revealed that its ministers will be approving the draft law that legalizes gay marriage on October 31 even as opposition to the legislation mounts.
Advertisement
<< Sharon Osbourne Gets Candid About Her Double Mastectomy
Social Media's Top 10 Comedy Moments On US Elections >>

A ban on the usage of the words 'mother' and 'father' from all official documents is being planned by the French government under controversial plans to legalise gay marriage.
Advertisement
News A-Z
A B C D E F G H I J K L M N O P Q R S T U V W X Y Z
What's New on Medindia