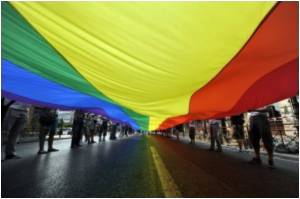 The French government has revealed that its ministers will be approving the draft law that legalizes gay marriage on October 31 even as opposition to the legislation mounts.

More than 1,200 French mayors or deputy mayors have signed a petition opposing the government's plans, with many of them warning they will not preside over same-sex ceremonies.

The German coalition government revealed new fault lines over proposals for a tax reform providing the same tax benefits for registered gay couples as those enjoyed by married couples.
Advertisement

But, in an interview with AFP, Prime Minister Jean-Marc Ayrault insisted there would be no backtracking on a manifesto promise by President Francois Hollande which has also run into strong opposition from the Catholic church.


The text to be presented to Hollande's cabinet will redefine marriage to stipulate that it is "contracted between two persons of different sex or of the same sex," Ayrault said.
Advertisement
The draft legislation will include provision for married gay couples to adopt children but the right will not be immediately extended to unmarried homosexuals, he added.

That question and the issue of gay couples' access to medically assisted conception will be addressed in secondary legislation at a later date.

"After a very broad consultation process that, of course, involved religious leaders, I've made up my mind," Ayrault said. "This is about ensuring fairness and equality that reflects the evolution of our society."

Six bishops in Normandy called for further debate on the legislation.

"We believe that such a decision, which would represent a turning point for civilisation, cannot rest on the principle of equality and non-discrimination alone," they said in a statement.

Xavier Lemoine, a mayor who has said he will not allow gay weddings to take place in his town hall in the Paris suburb of Montfermeil, said the proposed legislation would be a disaster for society.

"I can refuse to apply the law if the law is tyrannical," he said. "Above all else, I have to respect my conscience."

The mayors' petition against gay marriage is being orchestrated by Jacques Bompard, mayor of the southern French town of Orange and a member of the far-right National Front.

The 1,200 signatures represent less than one percent of the total number of mayors and deputy mayors in France.

Opinion polls suggest up to two thirds of French voters back the right of homosexuals to marry but they are evenly split on allowing them to adopt.

The further one goes from Paris, the stronger the opposition. A group of mayors on the Mediterranean island of Corsica have vowed they will refuse to carry out gay marriages and the reform is particularly controversial in France's Caribbean and Pacific territories.

Hollande has promised that the legislation will be on the statute books by mid-2013 and there is sufficient cross party support to ensure the government will be able to push it through on schedule.