In Crisis-hit Greece Gourmet Foods Give Glimmer of Hope 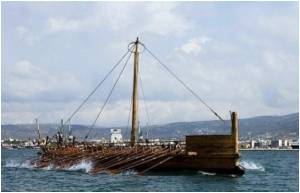 Livestock rearing and farming are a centuries-old way of life, in the rolling hills beneath Mount Olympus, the home of Greece's mythical gods.

Now, perhaps, they can also offer a glimmer of hope after the four years of crisis and gloom gripping Greece since the country nearly went bankrupt and had to turn to EU-IMF bailout loans for survival.

"Our land is one of the cleanest areas in Europe, without contaminated soil and water," says Nicos Fotiadis, chairman of Fotiadis Farm, which rose from humble beginnings in 1925 to the modern facility and processing plant it is today.


"The micro-climate gives products of incredible flavour, whether it is fruit, vegetable, oil or meat and milk," adds the 49-year-old.

The Fotiadis family has grown pigs for four generations on its farm and adjoining forest grounds, land that once belonged to the grandfather of former French president Nicolas Sarkozy, according to Fotiadis.
Advertisement
The family is still an integral part of the workforce. Fotiadis' son drives a delivery truck, his daughter helps package meat and the chairman himself climbs behind the tractor wheel on occasion.

After years of producing wild boar, the company is now switching to more productive black boar -- wild boar litters have four piglets at most, while black sows can birth up to 10.

Located outside the city of Katerini some 450 kilometres (280 miles) north of Athens, the farm has 240 breeding sows and Fotiadis plans to generate 160 tonnes of meat next year.

The farm supplies four supermarket chains and 60 butchers, restaurants and delicatessens in Athens and Thessaloniki.

"Black boars can literally turn into black gold for Greece," says Fotiadis, pointing to prior success by growers in Italy and Spain.

"We are already in contact with Greeks in Russia. Moscow is among Europe's wealthiest cities and Russia is becoming a consumer society. It's an ideal setting for quality products," he adds.

Formerly an agricultural society, Greece changed dramatically in the postwar period by placing emphasis on mining, construction and tourism.

Fields were abandoned and entire villages were depopulated, but the trend is now being reversed as Greeks look to a more affordable life in the countryside to escape unemployment in the cities.

"And scientific progress will show that many of our traditional products...such as yoghurt, olives and pickles...were truly beneficial...which is why there is now demand in distant markets such as the United States," he told AFP.

"We have huge amounts of potential in food production...(and a farm) doesn't need to be big to be successful," says Katerina Norman, manager of an organic fig farm on the island of Evia started by her family 35 years ago.

"In terms of taste or quality, I don't think we have anything to worry about," she adds.

It's in product presentation and quality standards that improvement is needed, Norman said.

For example, after too much rain, farmers should discard figs that turn bitter, but this is not always done.

"In the long-run, it doesn't pay to package bad quality," Norman says.

The truffle is one product attracting increasing attention, hitherto little-known in Greece but with a major following in France, Italy and Spain.

Truffles were unknown in Greece until the beginning of the decade. But consistent wild truffle discoveries over the past three years have shown that the north of the country is ideal for its cultivation.

The subterranean fungus, prized by chefs for its distinct aroma, can be successfully grown in the roots of several types of oak and hornbeam.

But the process is tricky and can take a decade to bear fruit.

"But it could give solutions to areas where people picked up and left the countryside...Greece is full of abandoned fields," she adds, noting that truffles can fetch between 100 and 4,000 euros ($5400) per kilo.

"Oak trees can produce truffles for 50 years," says Tziatziou, who hunts the fungus with the help of two Springer Spaniels. "It's enough to cover your grandchildren's needs."

However, the precarious finances of many Greeks means that although gourmet products can find markets abroad, domestic demand will be limited for some time.

There are currently 1.3 million Greeks unemployed, essentially one in each family, facing a mounting barrage of taxes imposed by the cash-strapped Greek state.

"Living standards must rise," concedes Tziatziou. "If people are having trouble heating their homes, who can think of truffles?"

Pies, Gourmet Hot Dogs, High-End Dining at Airport Will be Top Food Trends of 2011
Pies, hot dogs and gourmet airport food will be the flavour of the year 2011....

Spanish Gourmet Iberian Ham Make Way to US Menus
Iberian ham, a staple of Spanish menus and Christmas feasts, is about to go on sale in the United .....