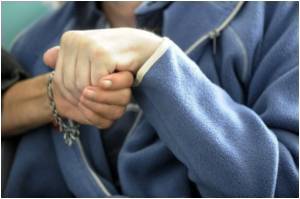 Immunotherapy containing antibody bapineuzumab in people with mild to moderate Alzheimer's disease lead to fall in a cerebrospinal fluid biomarker, which may indicate downstream effects on the degenerative process, states report published Online First by Archives of Neurology, a JAMA Network publication.

Alzheimer disease (AD) is a progressive neurodegenerative disease characterized by, among other things, deposits of extracellular β-amyloid (Αβ) plaques and intraneuronal neurofibrillary tangles with accompanying decreases in cerebrospinal fluid (CSF) Αβ and increases in CSF tau proteins. Bapineuzumab is an anti-Αβ monoclonal antibody, and immunotherapy with antibodies against Αβ is one of the major disease-modifying therapeutic approaches being evaluated for AD, the authors write in their study background.

Kaj Blennow, M.D., Ph.D., of the University of Gothenburg, Sweden, and colleagues conducted a combined analysis of two double-blind, placebo-controlled trials that included 46 patients with mild to moderate AD. A total of 27 patients were treated with bapineuzumab and 19 with placebo. The researchers evaluated whether bapineuzumab affected the CSF levels of the downstream biomarkers, total tau (T-tau) and phosphorylated tau (P-tau), and the primary biomarker Αβ in the completed trials.


"The reduction in the downstream biomarker CSF P-tau following treatment with bapineuzumab suggests that bapineuzumab reduces brain levels of P-tau, which may also reduce the formation of tangles in the brain," the authors note.

Donepezil may be Useful in Moderate-to-Severe Alzheimers Disease

Donepezil, which is currently used in mild-to-moderate cases of Alzheimer's disease, may be useful in severe cases as well, according to a recent study.
Advertisement
Although there was a reduction in CSF T-tau, it did not reach statistical significance compared with placebo. No clear-cut differences were observed for CSF Αβ, the study results indicate. But the observed decrease in both P-tau and T-tau require further examination, the authors note.

"An important question remains whether such changes in CSF biomarkers correlate with clinical benefit. This question will be addressed in the ongoing bapineuzumab phase 3 trials," the authors conclude.

A daily dose of vitamin B could greatly slow the onset of dementia and guard against Alzheimer's disease.
Advertisement
Advertisement

Hydrocephalus is an accumulation of the cerebrospinal fluid in the brain. Genetic abnormalities and ...

Middle ear infection, or otitis media, is a common type of infection that may or may not accompany the ...
This site uses cookies to deliver our services.By using our site, you acknowledge that you have read and understand our Cookie Policy, Privacy Policy, and our Terms of Use  Ok, Got it. Close
×