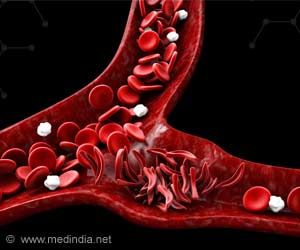 Hydroxyurea administration to children and teenagers with sickle cell anemia boosts average fetal hemoglobin levels above 20 percent and is associated with at least a two-fold reduction in hospitalization for any reason. The study was conducted by a research team at St. Jude Children's Research Hospital.

Results of the federally funded HUSTLE study--Hydroxyurea Study of Long-Term Effects--appeared online this week in the American Journal of Hematology.

Advertisement
‘Maximizing the dose of hydroxyurea increased levels of fetal hemoglobin and reduced the odds of hospitalizations for young sickle cell anemia patients.’

The findings should help settle the debate about how to optimize hydroxyurea for treatment of sickle cell disease in young people. Rather than calculating a standard dose of hydroxyurea based on patients' weight, researchers used a dose-escalation approach to determine the maximum tolerated dose for each of the 230 St. Jude patients enrolled in the study.


"Our analysis showed that using this approach, hospitalizations for the average patient fell to less than one every couple of years rather than four to six annually," said lead author Jeremie Estepp, M.D., an assistant member of the St. Jude Department of Hematology. "This frees children from the fevers, pain and other symptoms of this disease and gives them and their families more chances to enjoy childhood and adolescence."
Advertisement
Sickle cell anemia is the most common inherited blood disorder. The disease affects about 100,000 U.S. residents and occurs most often in African-American and Hispanic individuals. They inherit a mutation that affects the hemoglobin protein that red blood cells use to ferry oxygen throughout the body. Rather than soft, pliable red blood cells that travel easily through blood vessels, the sickle cell mutation leaves patients with red blood cells that can become brittle and banana-shaped. The sickled cells clog blood vessels and lead to pain, organ damage, strokes and other symptoms and also leave patients at risk for premature death in middle age.

St. Jude pioneered the use of hydroxyurea to treat sickle cells in children. The drug is now offered to all sickle cell patients who are 9 months or older. The drug increases production of fetal hemoglobin, which functions normally in individuals with sickle cell anemia. Previously published data from HUSTLE and other studies reported that hydroxyurea was safe, reduced stroke risk and improved spleen and kidney function.

Despite hydroxyurea's proven benefits, the optimal dosing strategy for the drug has remained controversial. Also lacking has been evidence of overall improved patient outcomes if hydroxyurea is used to increase blood levels of fetal hemoglobin to more than 20 percent.

For this study, patients received a starting dose of hydroxyurea that was escalated in a stepwise manner until patients reached a predetermined maximum dose (either 35 milligrams per kilogram daily or 2,000 milligrams daily) or experienced mild neutropenia. About 2 percent of patients in this study developed transitory neutropenia, or a low level of disease-fighting white blood cells called neutrophils. More than 75 percent of patients had completed the dose escalation when study data were analyzed.

Pharmaceutical records suggest that patient compliance was good. Throughout the four-year study, almost 94 percent of patients had possession of their medication, which exceeded the national average. "St. Jude has invested in the clinical infrastructure, including case managers and other staff to support and follow up with families to make sure they receive recommended care, including medication," Estepp said. "These results show how patients and families benefit."

"These results support a hydroxyurea dosing strategy designed to produce fetal hemoglobin levels that exceed 20 percent in an effort to decrease hospitalization of children with sickle cell disease," Estepp said. St. Jude researchers are now leading a multi-center trial to determine if toddlers with sickle cell disease would benefit from a similar dosing strategy or would respond better to a standard dose.

Estepp said the findings also underscore the need to improve and expand access to hydroxyurea in the U.S. and internationally.

Source: Eurekalert
Advertisement
<< What Makes Smoking So Difficult to Quit?
Insomnia in Young Adults Associated With Alcohol Use >>

Hemolytic Anemia
Hemolytic anemia, also known as hemolysis, is a condition where the destruction of red blood cells ....

Patients in India With Sickle Cell Anemia Suffer Due To Insufficient Healthcare Services
Sickle cell anemia is a hereditary blood disorder, characterized by an abnormality in the ......