Hunters Return Cautiously After the Civil War Hiatus in Algeria 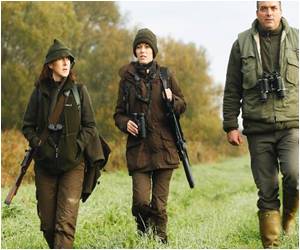 Hunters head into the thicket in pursuit of a wild boar with rifles slung over their shoulders .

Just 55 kilometres (35 miles) east of the capital, the inhabitants of Thenia were targeted during the 1990s by militants searching for guns to fight with, which resulted in the authorities confiscating weapons.

Women may be Better Hunters Than Men

It's almost dark and raining hard as Walter Rienzner, perched on a raised shooting platform, drops the bombshell in a whisper: women might be better hunters than men.
Advertisement

They also banned hunting, a highly popular activity at the time, with some 50,000 wild boar killed every year by the estimated 60,000 hunters and 320 separate associations operating in Algeria.


"Hunting was suspended in 1993 because of terrorism," says Youcef Hammi, president of the national hunting federation, adding the ban was still in force except in the case of wild boar, for which special permission can be obtained.

With their mouths watering, thousands of divers took to Florida's waters for the southern US state's annual 48-hour mini-season when lobster lovers can hunt for gourmet gold.
Advertisement
But illegal ammunition is still needed.

"It's all about being resourceful," Hammi says with a smile.

In the past two decades, the number of boar living in the scrubland, or "maquis", has surged to the point where some even go foraging into nearby towns, and officials have had to organise culls to contain them.

But the hunting parties are strictly controlled, to avoid them being mistaken for Islamist militants who found refuge in the maquis during Algeria's "black decade" of conflict, and who remain active in the region.

Last month, just two days after ailing leader Abdelaziz Bouteflika won a fourth mandate in presidential polls, 11 soldiers were killed in the forests of the nearby Kabylie, in an ambush claimed by Al-Qaeda in the Islamic Maghreb.

One of the hunters, in this group of around 30, remembers how only the "very brave" came here during the 1990s, and even up until 10 years ago, because the area was awash with militants.

Leading the hunting group, with his burly build and thick moustache, is Said, who retired from the army after 32 years of service, and is fondly referred to as "ammi", or uncle.

"Several years ago we got a call from the administration of Bab Ezzouar university (in an eastern suburb of Algiers), asking us to get rid of the wild boar. In one single day we killed 74 of them," he recalls.

Walkie-talkie in hand, Said is in charge of liaising with the military to prevent any mishaps, while explaining the rules of the hunt to his enthusiastic team, who listen attentively.

The dogs tear off into the undergrowth, as the beaters wave decoys to lure the wild boar from their cover.

Perched on a rock, he sees one emerge from the bushes and fires his first shot, stopping the animal in its tracks as it gives a loud snort.

Two more shots ring out and the animal slumps to the ground, with Said rushing down to check that it's dead, and see where the bullets struck.

He then poses proudly next to his quarry, for the obligatory photo-op.

"A good day must end in a good way, without any incident," says Youcef Hammi, underlining the strict security procedures followed by the hunting group.

"Tomorrow, God willing, when hunting officially gets the go-ahead, wild boar could become a real source of income and boost tourism in the region," he adds.

But if Algeria wants to export its wild boar meat, considered a delicacy in many parts of the world, but prohibited for Muslims, it will face administrative hurdles, because Algerian vets are not trained in swine diseases.

"We can't issue a health certificate," explains Tarik Ladjouz, a vet in Algiers.

Currently, the meat is sold illegally to expatriates, especially the sizeable Chinese community, eaten discreetly by Algerians less scrupulous about religious observance or offered to zoos.

"At the end of each outing, we butcher the animals on site and anyone who wants to takes his share," says Abdelmadjid, in his 60s, who admits he cooks the meat alone in the garden to not upset his wife and children.

Hiatus Hernia
News Archive
News Resource
Advertisement
News Category
Parents are 'Winging It' on Their Kids' Mobile Use Ankle and Ankle Movements While Riding an Hoverboard Is It Healthy to Let Your Mind Wander? Walk Till it Hurts: Good News for Peripheral Artery Disease Patients Plus Size Models and Social Media: Where Do They Fit In?
More News
Sign up for Wellness Consult a Doctor Sign up for Selfcare