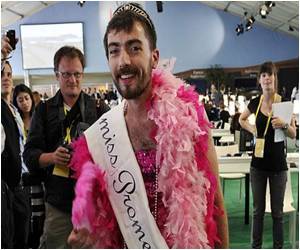 As girls in lush evening gowns totter around on high heels or dance to loud music, boys shout cheerfully across downtown Sofia.

At the end of May, thousands of graduating high-school students, aged 18 to 19, hold their extravagant proms -- a vanity fair in the EU's poorest country.

Bulgaria's average monthly salary stands at about 400 euros ($545) and over 12-percent unemployment has left many families struggling to make ends meet.


But even the poorest make sure to put something aside -- often two or three months' salary -- for this expensive tradition. Parents often go into debt ensuring the children get to enjoy their "big night out", as well as the traditional, wedding-like reception for their relatives that goes with it.
Advertisement
"It's terribly overdone but everyone does it," student Stefka Drenova said in her splendid hairdo and strapless sequin dress one recent evening.

"I would not have minded wearing a T-shirt but that would have made sense only if it was done by everyone," said Hristina, wearing a studded silver-and-blue bodice that glittered in the evening sun.

Preparations for the prom start early in the school year.

"The restaurant has been booked since last October, dresses dominate all talk and as the feast draws nearer, girls have hairstyle and make-up trials to avoid any fault on D-Day," Rositsa Lozanova, a high-school literature teacher, told AFP.

The prom tradition dates back to the days of communism but is becoming "more and more exotic" with every passing year, said Nikolay Ovcharov, casting a proud glance at his daughter standing nearby in a bright yellow tulle dress.

"I lost count of how much money went into all that but it is a very serious expense, to be frank."

It is easier with the boys.

"One suit will do and they can wear it afterwards," said Todor Todorov, adding he was happy his son Ivan had chosen to walk to his prom, instead of renting an expensive ride.

Rows of retro convertibles, huge limousines, SUVs and even trucks decorated with bunches of balloons make traffic and noise on Sofia's streets unbearable on prom evenings, almost all held in one week at the end of May.

Police warnings are also repeatedly broadcast on the radio and in the media ahead of the event, as students lean out of car windows and sunroofs, counting to 12 at the top of their lungs to mark the end of their 12 years in school.

But many feel the spending sprees have grown out of hand, and for the first time this year, campaigns have appeared calling for students to donate part of their prom money to good causes.

"We went to our last-day-of-school ceremony in white T-shirts and donated the money to 'butterfly children'," said Ivan Todorov, a student at the French language school in Sofia.

Other schools in the capital also joined the initiative to help children suffering from epidermolysis bullosa -- a rare genetic skin disease.

But the tradition of the "big night out" remains a beloved one, as a symbolic break between the carelessness of the high-school years and the responsibilities of early adulthood.

"There is no other night like this one and I hope we'll have a great time," said Bogdana, who will soon be heading to Britain for her studies.

"Whatever it costs, my prom is worth it. After that I'll earn my living all by myself," said Nikoleta Kirilova, although she looked a little embarrased in her long dress garnished with a huge ribbon.

For now, the usual emotions that come with the end of schooldays were on display. As well as joy and excitement, there were tears and uncertainty as most students said they would apply to universities abroad and may not see their friends again for a while.

"I do not know if I will return to live in Bulgaria," said Maria Yanakieva in a solemn black lace dress.

Promising Results With New Drug to Prevent Breast Cancer
Preventing a return of breast cancer in young women is more effective with a new treatment option .....

Promising Results With Clinical Trials Designed to Block Autophagy in Multiple Cancers
Clinical trials have shown that the malaria drug hydroxychloroquine blocked autophagy in a host of ....