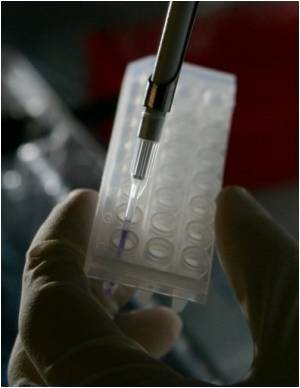 Hope to build artificial organs for human implantation has been boosted with the creation of Lego-like blocks made of human cells.

Javier Fernandez and Ali Khademhosseini at the Massachusetts Institute of Technology have built a variety of living 3D shapes on a cell-by-cell basis, such as tubes and solid spheres.


The researchers built the "human Lego" by dipping cells cultured from liver tumours into a polymer called polyethylene glycol (PEG).

The parcel was then hardened, or baked, with UV light to form bricks. Another coating of PEG made the bricks sticky, and they were placed in a mold. To fill any gaps, the whole structure was dunked in PEG a final time and irradiated once more.

Animation and slides providing graphic explanation of Bone Marrow Transplantation (BMT)/Stem Cell Transplantation that is done for leukemia and other blood-related disorders.
Advertisement
Fernandez said, despite being trapped and baked within a polymer, cell staining shows that the cultured cells remained alive.

Earlier attempts to produce 3D cellular structures had failed because cells didn't stick to each other, says Fernandez. PEG overcomes this problem.

However, Emmanuel Reynaud of University College Dublin in Ireland, pointed out polymer is not a tissue. He explained that the individual live cells are not communicating in this experiment, and "cells in a tissue have to communicate with each other".

The study has been published in Advanced Materials.

A new Artificial Organs study has revealed that artificial skin with living hair cells used for dressing wounds can speed up the time it takes for an injury to heal.
Advertisement
<< Study Finds Big Drop in Childhood Mortality Rates
Vaginal Gel That Could Protect From HIV Developed >>

Nutam (400mg) (Piracetam) Blood Donation - Recipients Post-Nasal Drip How to Reduce School Bag Weight - Simple Tips Pregnancy Confirmation Calculator Drug - Food Interactions Drug Side Effects Calculator Blood - Sugar Chart The Essence of Yoga Selfie Addiction Calculator
This site uses cookies to deliver our services. By using our site, you acknowledge that you have read and understand our Cookie Policy, Privacy Policy, and our Terms of Use