Vaginal Gel That Could Protect From HIV Developed 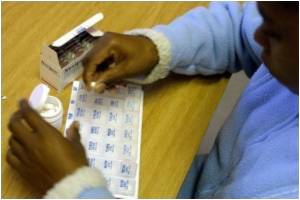 In a test on monkeys, a vaginal microbicide based on a new type of anti-HIV drug could offer significant protection against infection with a virus similar to HIV, researchers have found.

The study is the first of a gel with an integrase inhibitor, one of the latest additions to the arsenal of drugs for the treatment of HIV but just one of the many compounds or drug combinations that researchers are hoping will be a stronghold for HIV prevention.

Statistics tell us that the world HIV+ population has risen drastically from 8 million in 1990 to a whopping 33 million in 2007! Even more alarming is the fact that young people (below the age of 25) account for half of these infections! This is adequate proof for the lack of awareness among the general public even in these modern times. So take our quiz and brush up on the essential facts of HIV/

The experimental vaginal microbicide gel containing a drug from a class of antiretrovirals (ARVs) not previously examined for use as a topical prevention approach provided significant protection in preventing vaginal transmission of simian/human immunodeficiency virus (SHIV) - a combination of HIV and a related monkey virus - among macaques, reported Dr. Charles Dobard, and Dr. Walid Heneine, of the U.S. Centers for Disease Control and Prevention.


Integrase inhibitors, the latest weapon in the HIV treatment armamentarium, stop HIV from incorporating its genetic information into the DNA of an infected T cell, essentially heading off HIV's master plan to hijack all future generations of cells.

They are intended to be used in combination with other ARVs that target different steps in the HIV life cycle.

Studies have found that integrase inhibitors can suppress virus that is resistant to some of these other ARVs, including those in a class called nucleoside/nucleotide reverse transcriptase inhibitors.

The researchers tested the ability of the compound L-870812 to protect against infection with SHIV.

The gel was applied vaginally to three pigtailed macaques twice a week for seven weeks.

Thirty minutes after each gel application, the animals were exposed to SHIV, for a total of 14 "challenges." A fourth animal received a placebo gel in the same manner.

Two of the three macaques receiving the active gel remained uninfected after seven weeks of being exposed to SHIV.

Importantly, the animal that became infected while using the active gel had no evidence of drug resistant virus even after continuing the gel regimen for an additional 15 weeks.

This is significant because one of the concerns with ARV-containing gels is that the inadvertent use of these gels in someone who is HIV-infected could allow the virus to become resistant and limit treatment options in the future.

While the results are promising, additional studies will be needed before deciding whether to advance this particular vaginal gel to trials in humans.

The study was reported at the International Microbicides Conference in Pittsburgh.

Animation on how to use Female condom and its advantages.
<< 'Human Lego' Could Pave Way for Artificial Organs
Veggie Diet can Help You Score With Opposite Sex Than Sunta... >>

Find a Hospital Post-Nasal Drip Find a Doctor Pregnancy Confirmation Calculator Loram (2 mg) (Lorazepam) Diaphragmatic Hernia Turmeric Powder - Health Benefits, Uses & Side Effects Accident and Trauma Care Drug Interaction Checker Daily Calorie Requirements
This site uses cookies to deliver our services. By using our site, you acknowledge that you have read and understand our Cookie Policy, Privacy Policy, and our Terms of Use