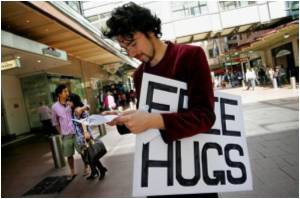 Every person has some level of alexithymia, a personality trait which keeps people from sharing or even understanding their own emotions.

Scientist Explain Why We Cry

A good cry can often make us feel better and help us put things in perspective. Now, a new study has revealed that the benefits of crying depend entirely on the what, where and when
Advertisement

Colin Hesse, an assistant professor of communication in the College of Arts and Science, University of Missouri. said previous studies estimate 8 to 10 percent of people suffer from high alexithymia.


Those who have high alexithymia have trouble relating to others, as they tend to become anxious around others or avoid forming relationships. It is often found with other conditions on the autism spectrum, as well as post-traumatic stress disorders. Studies have shown that alexithymia has been related to eating and panic disorders, as well as substance abuse.

Depression is one of the most common mental disorders affecting approximately 340 million people in the world. No one is immune from depression - it occurs in people of all social classes, all countries and all cultural settings.
Advertisement
"We know how important it is for people to empathize and be open with the people around us, because that makes someone more competent as a communicator," Hesse said. "We still need to study the best approaches, but we believe that affectionate communication ranging from hugs, touching, or even the posture taken during communication - can make a positive impact, even if it only relieves anxiety."

In the paper "Affection Mediates the Impact of Alexithymia on Relationships," published in the journal Personality and Individual Differences, Hesse and Kory Floyd of Arizona State University surveyed 921 people and measured shared affection, attachment levels, and the number of close relationships. The researchers found that even though alexithymia was negatively related to forming relationships, the impact was lessened by giving and receiving higher amounts of affectionate communication.

While alexithymia is still relatively new to the scientific world, some scholars believe it may eventually be added to the Diagnostic and Statistical Manual of Mental Disorders. As a communications expert, Hesse is studying the ways alexithymia sufferers can ease the physical and mental costs of the affliction and succeed at relationships. Hesse's previous work has shown that affectionate communication releases hormones that relieve stress, and his future studies will be applicable to all forms of communication.

"Because there is so much gray area with alexithymia, the potential for what we learn could have benefits for people with conditions such as emotional distance and autism spectrum disorders," Hesse said. "I want to help alexithymia sufferers understand the undercurrent of the messages sent from other people."

More News on:
Personality Types Openness to Experience Understanding Introversion and the Probable Signs of Introversion in Children

Vent Forte (Theophylline) Post-Nasal Drip Accident and Trauma Care Calculate Ideal Weight for Infants Noscaphene (Noscapine) Nutam (400mg) (Piracetam) How to Reduce School Bag Weight - Simple Tips Drug Side Effects Calculator Color Blindness Calculator Daily Calorie Requirements
This site uses cookies to deliver our services.By using our site, you acknowledge that you have read and understand our Cookie Policy, Privacy Policy, and our Terms of Use  Ok, Got it. Close
×