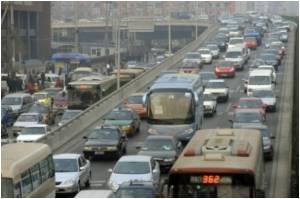 Long nighttime drive can cause eyestrain because while our vision adapts to the surrounding darkness, the sudden stabs of brightness from streetlamps can be distracting, irritating and even painful.

Even as LED technology has transformed the lighting industry, bringing the promise of more energy-efficient road illumination, some fear that the new lights could cause even more troublesome, unsafe glare.

A team of researchers from China and the Netherlands has developed a way to evaluate the human impact of uncomfortable glare caused by LED road lights. They created a model that can predict the level of discomfort experienced by drivers under various lighting conditions. The team today reported their findings, which could guide streetlight placement and design, in The Optical Society's (OSA) open-access journal Optics Express .


"With the development of the LED industry, there is no doubt that more and more LED lights will be used for road lighting," said Yandan Lin, an associate professor and director of the Vision and Color Research Laboratory at Fudan University in Shanghai, China. "We believe that the lighting industry has an urgent need to update the ways to characterize discomfort glare caused by LED road lights."
Advertisement
Traditional ways of predicting how much a person will want to look away from a bright light, characterized by a term called discomfort glare, are based on the nature of conventional light sources and may not be appropriate for LED streetlights, Lin noted. For example, LEDs are designed to emit the same amount of light as conventional bulbs from a smaller area, which could possibly increase the discomfort glare. In addition, white LEDs typically have more energy in the blue part of spectrum, which can also cause more glare because blue light is perceived brighter by the human eye under the same light levels, based on past studies.

To investigate the effect of LED streetlights on the discomfort glare perceived by drivers, the team devised a laboratory set-up to mimic visual conditions on the road. The researchers painted the floors and walls of a room completely black, and then positioned a collection of light sources around the room to simulate the illumination from an LED streetlamp as it would appear to a driver on a dark road. The researchers adjusted the light sources to create 72 different lighting conditions, and volunteer observers were asked to rate their level of discomfort glare under each condition on a standard deBoer 9-point rating scale, ranging from "unnoticeable" to "unbearable."

The team was guided in the selection of test lighting conditions by previous work done on discomfort glare. "Although the characterization of discomfort glare for conventional light sources may not be applied to LEDs, the possible factors affecting discomfort glare may remain the same," Lin explained.

Lin and her colleagues systematically modified four lighting parameters in their experiments: the luminance (i.e., the luminous intensity of light per given area) of the LED lights, the background luminance, the apparent size of the LED lights from the perspective of the observers (measured by a parameter called solid angle), and the angle between the LEDs and the line of sight of the observers.

Based on the results, the team developed a model that related the four parameters mentioned above to the level of discomfort glare experienced by an observer. They validated the model with two additional experiments - one carried out in the lab and one on the real roads.

The researchers found that the interaction between the LED luminance and the solid angle, which can be characterized by the amount of light hitting an observer's eyes (known as vertical illuminance) was the most significant factor affecting discomfort glare. To minimize discomfort, they recommend minimizing both the amount of light hitting at the eyes and the luminance contrast between the streetlights and the background, which can be accomplished through good optical design of the LED light unit and careful placement of each streetlight.

While more follow-up work would be needed before the team's results could guide industry standards, the researchers hope their model could still be put to immediate use by design and construction firms working on LED streetlight replacements and installations.

Going forward, the team plans an interdisciplinary investigation of the physiological changes caused by glare, which could allow the researchers to ditch the 9-point rating scale in favor of more concrete measurements of discomfort such as eye movement and pupil size.

"Glare has a strong effect on the normal visual function, causing a serious threat to safety. And the accumulative effect of glare also threatens the physiological health of the human body," Lin said. "So it's very important to reduce the glare on roadways."

LED Light Bulbs in Los Angeles to Reduce Carbon Emissions
The Los Angeles civic authorities are going in for massive retrofitting of 140,000 streetlights ......

Wrinkles may Soon be Erased by LED Light- Green Tea Cream
A combination of high-intensity light from light-emitting diodes (LEDs) and a lotion made of green ....

White LED Lights Dangerous to Our Health
Exposure to white LED bulbs suppresses our brain's production of melatonin more than exposure to ......