How to Develop Protein-rich Foods from Bitter Rapeseed? 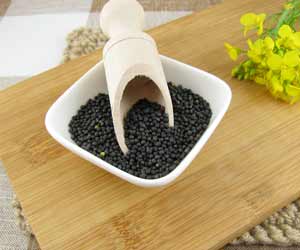 Rapeseed contains high levels of protein. However, protein extracts from rapeseed have a strong, bitter off-taste. A new study is digging deeper to find out strategies that can be used to produce tasty, protein-rich foods from rapeseed.

Rapeseed doesn't just contain oil but high-quality protein, too. However, protein extracts from rapeseed have an intense, bitter off-taste. A team led by food chemist Thomas Hofmann has now identified the substance that is pivotal for the bitter taste. This is a first step towards developing rapeseed for the human protein supply.

Canola oil is a genetically modified rapeseed oil. Compared to saturated oils it reduces abdominal fat and bad cholesterol. It is rich in vitamin E and MUFA.
Advertisement
‘How could bitter rapeseed be used as a protein source for human nutrition? Identifying the key substance that makes protein extracts from rapeseed (canola) taste bitter and inedible could pave the way for developing suitable technological processes or breeding strategies that can be used to produce tasty, protein-rich foods from rapeseed.’
Read More..
Tweet it Now


According to the Food and Agriculture Organization of the United Nations (FAO), the demand for food will approximately double by 2050 due to the growing world population. "Bottlenecks are to be expected in this context, particularly in protein supply," says Thomas Hofmann, who heads the Chair of Food Chemistry and Molecular Sensory Science at the Technical University of Munich (TUM).


According to Hofmann, who is also Director of the Leibniz-Institute for Food Systems Biology, it is therefore important to develop new plant protein sources for human nutrition. And rapeseed is a good local source.

Canola oil is more harmful than healthful for the brain as it can increase the risk of Alzheimer's disease.
Advertisement
Rapeseed Contains High-quality Protein

Rapeseed doesn't just contain oil but high-quality protein too, which contains many essential amino acids. Worldwide around 1.12 million tons of crude protein are produced annually from rapeseed oil. Although farmers have long used this so-called rapeseed cake as a protein feed for animals, it has not played a role as a protein source in human nutrition so far.

One reason is that the accompanying substances contained in rapeseed strongly impair the taste of the obtained protein isolates. These substances include, for example, very bitter-tasting secondary plant constituents. Hofmann and his team, therefore, looked into the issue of which bitter substances cause the rapeseed protein's unpleasant bad taste.

The researchers investigated three different protein isolates using mass spectrometric analysis methods and taste tests. The first isolate was an extract of all the proteins contained in rapeseed meal. The second isolate predominantly contained cruciferin and the third napin, which are the rapeseed's two main storage proteins. All three isolates had a protein content of 80 to 90 percent.

As the investigations show for the first time, a compound called kaempferol 3-O-(2'''-O-sinapoyl-ß-sophoroside) is the key substance that makes protein extracts from rapeseed inedible. The cruciferin isolate, in particular, contained a large amount of this bitter substance with 390 milligrams per kilogram. The rapeseed meal and napin isolate had less than a tenth of the quantity, but still tasted bitter in the sensory test.

"Since we now know the cause of the bitter off-taste, it is much easier to develop suitable technological processes or breeding strategies that can be used to produce tasty, protein-rich foods from rapeseed," said co-author Corinna Dawid, who heads the Phytometabolomics research group at TUM.