How Powerful is Your Punch? 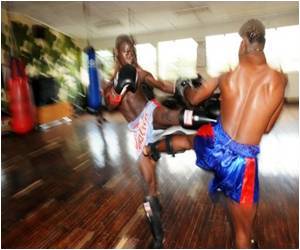 A new study by researchers from Imperial College and University College London seems to suggest that the power in your punch does not depend on the strength of your muscles but relies more on brain power.

A comparative study on those trained in karate with a black belt status, and physically fit members of the public during punching sessions, showed that connections between areas of the brain had a direct link with punching ability.

It has more to do with timing and the movement between the shoulders and the wrist, researchers said.


Brain scans showed that the white mater in the cells which carry signals were different in structure among those who trained in martial arts.

This just goes to show that physical training, especially forms of martial arts, impacts brain power and improves it. So, during punch sessions, it is the improved connections in the regions of the brain that actually packs all the power in the punch, especially when the punch is dealt at the precise and perfect time. And this is purely achieved only by the brain!

Punch a Panda In NY To Feel Good!