Hot Tea: Boon or Bane for Smokers and Drinkers? 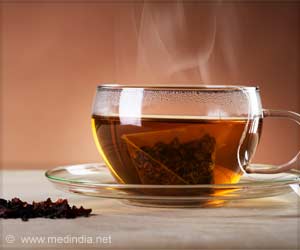 Drinking hot tea can increase the risk of esophageal cancer, especially in those individuals who smoke cigarettes and consume alcohol daily.

However, tea aficionados do not have much reasons to worry as the researchers found that in the absence of both excessive alcohol consumption and smoking, daily tea drinking was not associated with esophageal cancer risk.

"Drinking hot tea contributed to cancer only when it clustered with smoking and drinking alcohol excessively," lead author Jun Lv, Professor at Peking University in Beijing was quoted as saying by CNN.


Esophageal cancer kills approximately 400,000 people every year, according to the International Agency for Research on Cancer, cancer research arm of the World Health Organization.
Advertisement
For the study, the researchers followed for about 10 years 456,155 participants aged 30 to 79 in China.

Participants in the study who drank high-temperature tea, consumed alcohol excessively and smoked had an esophageal cancer risk more than five times greater than those who had none of those three habits, said the study published in the journal Annals of Internal Medicine.

Tobacco smoking and alcohol consumption - both of which are known to cause esophageal cancer - as well as the chemical compounds and adverse thermal effect of hot tea, considerably complicate the association between tea drinking and cancer risk, the study suggests.

The researchers found a synergistic association between hot tea drinking with excessive alcohol consumption or smoking and the risk for esophageal cancer.

Source: IANS
Advertisement
<< Zika Virus Infection in Mother can Cause Brain Damage in Fet...
Cataract may Pose a Major Threat to Diabetic Patients >>

More News on:
Amoebic Dysentery Diet Lifestyle and Heart Disease Antioxidants to Help You When You Quit Smoking

One Cup of Hot Tea Everyday can Lower Glaucoma Risk
Consuming one cup of hot tea can lower the risk of glaucoma. However, no link was found for ......

Scalding from Hot Tea Proves Nearly Fatal for 10-Month-Old
A 10-month old baby nearly died due to bacterial infection that developed after being scalded by a ....

Sensitive Tooth Sufferers may Benefit from a New Discovery
A new research finding could give ice cream lovers and hot tea drinkers with sensitive teeth a ......

Electricity Can Be Generated From Egg Whites And Tears
The ability to generate electricity by applying pressure, known as direct piezoelectricity can ......