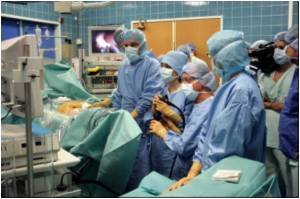 A new Johns Hopkins research suggests that older, sicker heart-transplant recipients are significantly more likely to be alive a year after their operations if they have their transplants at hospitals that do a large number of them annually. These patients fare less well at low-volume centers, the research shows.

The findings, to be presented May 9 at the American Association of Thoracic Surgeons' annual meeting in Philadelphia, add more support to the notion that patients do better when treated at medical centers that handle a higher number of cases similar to theirs.

"There's growing evidence throughout medicine and surgery that the volume of cases done at a given medical center has an impact on outcomes," says George J. Arnaoutakis, M.D., a general surgery resident at the Johns Hopkins University School of Medicine and the study's leader. "Transplant teams more familiar with a procedure do a better job than those that only do a handful each year."


The researchers combed through United Network of Organ Sharing (UNOS) data from all of the heart transplants done in the United States between January 2000 and December 2009. Using that information, the researchers assigned each of the 17,211 patients a risk score, which took into account known risk factors for complications and/or death after heart transplant, including age, race, cause of heart failure, bilirubin and creatinine levels and whether they had been on life support. The higher the score, the greater risk of death one year after transplantation.

"Patients at high risk of mortality should probably only be transplanted at high-volume centers," Arnaoutakis says.

Arnaoutakis cautions that the findings should not be seen as an indictment of the training and skill of surgeons at low-volume centers. Rather, he says, the systems and infrastructure of a center doing few heart transplants are most likely a bigger factor.

"There are certain processes that may be better performed at regional centers of excellence doing more of a certain procedure," he says. "People talk about it with airline pilots  only at 10,000 hours of flying are they considered expert at flying. The experience of a center can be discussed in similar terms."

Nurses at a high-volume center, for example, may be quicker to recognize complications and intervene earlier, he says. Operating room teams might be better prepared to handle a transplant that occurs in the middle of the night.

"The more you do it, the better you become at doing it," Arnaoutakis says.