Homeless In Romania Make a Living Off Recycling Computers 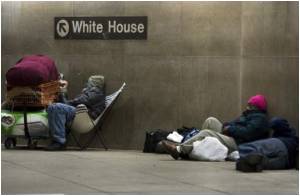 When, in an unexpected twist, Doru Ipeghian ended up living on the streets of Bucharest at 55 after a comfortable life in the United States, he lost confidence in himself.

But today he "feels more like a person again" thanks to a project enabling people living on the margins of society to recycle computers and make eco-friendly cotton bags in order to re-join the labour market.


Located on the premises of a now derelict giant industrial complex of the Communist era (1945-1989), on the outskirts of the Romanian capital, the "Ateliere fara frontiere" (Workshop without borders) is all about second chances.


Used computers given by multinationals like Apa Nova or embassies are fixed by the employees and donated to local communities and schools in Romania, where huge discrepancies still remain between urban and rural areas.

The parts that cannot be re-used are sorted out and sold to specialized recycling firms, a trade still fairly new in the Balkans.

The cotton bags made under the supervision of the ONG Viitor plus (Future Plus) are bought either by shops selling natural cosmetics or by firms like the Royal Bank of Scotland or Royal Canin, when they organize seminars.

"This project is about the only one that gives an opportunity to homeless people and to youths who dropped out of school and left their families to get back to work," Elena Adam, a social worker for the Romanian Samu social told AFP.

Romania was hit last year by one of the worst recessions in Europe. The economy shrank by 7.1 percent in 2009 and is set to stagnate or even shrink again this year.

Unemployment nearly doubled from 4.4 percent at the end of 2008 to 8.07 percent in April this year.

"Finding a job for people who are seen as socially more vulnerable has become more and more difficult," Adam insisted.

"When you are on the street, you do not have an ID card. It is a stigma when you look for a job because it says plainly 'homeless'," Ipeghian said.

A former Bucharest-born ice-hockey player, he moved to the United States when he was 17 as his parents escaped the dictatorship of Nicolae Ceausescu.

"I got everything there. I was a hairdresser in Boston for almost 40 years. I had a wife and two children, a house, friends, everything. But I blew it up," he acknowledged.

"I started to take drugs and I became addicted. I ended up in jail."

His wife asked for a divorce, and Doru, who did not have the American citizenship, was deported to his native Romania where he had neither friends nor family left.

"It was a shock. I was homeless. In the winter, I was trying to keep warm by staying the whole day at the train station."

But one day, Doru discovered the "workshop." It was in 2009, when the initiative just started.

Doru like about 20 other people over the last year was hired to work eight hours a day to recycle computers or make bags.

They are paid about 150 euros a month, slightly more than the minimum salary in Romania. They also get a monthly free public transport card and food at a collective restaurant.

"We also provide psychological support and help to sort out their administrative situation and the possibility to follow courses," explained Patrick Ouriaghli, president of the Ateliere fara frontiere.

"The workshop is meant to be a springboard to a regular work contract within a year's time," said executive director Raluca Gheorlan.

It worked out for Doru who last week signed a steady contract with eco-friendly car cleaning company Sineo in Bucharest.

"The workshop makes us believe in ourselves again," said Georgiana, another "workshop" employee.

Doru said he had "simple plans" for now: save money to be able to rent an apartment and live a "plain simple life."

At the workshop he learned how to use the Internet. "Now I am in touch with my children again in the States via email."

Chinese Blogger Gives Sheltered Life to Beijing's Homeless
Zhang Shihe is not your typical activist. But the 57-year-old retired Chinese advertising executive has embraced the role since rescuing 14 disabled people from the streets of Beijing,
READ MORE

Homelessness Increasing In Australia
Homelessness is on the rise in Australia. A report by Homelessness Australia, a nonprofit, says, each day nearly 1 in every 200 Australians is homeless, without safe, secure or affordable housing.
READ MORE

Study Reveals High Death Rates, Short Life Expectancy Among the Homeless
Homeless and marginally housed people have much higher mortality and shorter life expectancy than could be expected on the basis of low income alone, concludes a study.
READ MORE