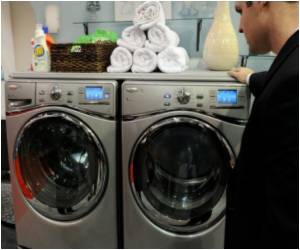 Mobiles phones aren't the only things that are getting smart. Home appliances too.

On display at the Consumer Electronics Show (CES) here along with the latest smartphones and touchscreen tablet computers are ovens, dishwashers, washing machines, dryers, refrigerators and other products for the "connected" home.

Cash and jewellery no more attract recession-hit burglars, as they've set eyes only on fridges and other kitchen appliances.
Advertisement

South Korea's LG Electronics is displaying its "Thinq" home appliances which are connected to a home Wi-Fi network and can be controlled by a smartphone or a computer.


They include washing machines that can be instructed from the office to run at the most cost-effective times and a camera-equipped robot vacuum cleaner, the Hom-Bot, which can be instructed remotely to clean the floor.

A new research has brought environmentally friendly 'magnetic' refrigerators and air conditioning systems a closer to reality.
Advertisement
The camera embedded in the robot can also be used to keep an eye on the house while the owner is away.

Also from LG Electronics are refrigerators with touchscreen LCD displays that let users keep tabs on where items are located in the refrigerator and when they expire.

An owner can access the information while shopping via a smartphone and check whether they have enough milk or orange juice, for example.

In case of a problem such as a door left open, the LG refrigerator can send an alert to an owner's smartphone or computer.

Tom deSalvo, a spokesman for Kenmore, the appliance brand of retail titan Sears, said the company is researching the possibilities of being able to turn an oven or a clothes dryer on or off using a smartphone.

Safety questions have not made this a reality yet, he said, but as of next year, the temperature of a Kenmore oven, for example, can be regulated from a distance using a smartphone.

US home appliance giant General Electric is making its first appearance at CES to show off its home energy management solutions including "Nucleus," which gives consumers information about electricity consumption.

Nucleus, which is expected to be available later this year, works with smart meters, smart appliances, programmable thermostats and software applications to help homeowners monitor their usage and reduce their electricity bills.

Joseph McGuire, the president of the Association of Home Appliance Manufacturers, said US government energy standards -- and tax credits for energy efficient appliances -- were a big driver for innovation in the sector.

Ultimately, though, it's consumers who will decide, he said, with the ability to cut down on electricity bills a prime motivating factor.

It's not just the standard household items such as washers and dryers which are taking advantage of the latest technology, other products on display here are too.

Cedric Hutchings, co-founder of Withings, a French start-up showing off a baby monitor, a blood pressure monitor and other products at CES, said smart devices are opening up all kinds of new possibilities for the home.

The Withings baby monitor features a camera equipped with night vision that can send pictures and audio to an iPhone or any other device with a connected screen.

A microphone allows parents to talk to the child from another room and they can set alarms to be awoken if a baby's sleep is disrupted.