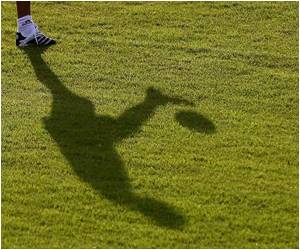 Where would you go to celebrate the win or drown your sorrows after watching a pulsating World Cup game?

You're in gigantic Sao Paulo, you're hip, you're wearing your team colors and, above all, you're thirsty.

While football is usually seen as a man's game, playing it can help reduce blood pressure among women between 35 and 50 years of age, a new study reveals.
Advertisement

Head for the heaving, bottle-strewn streets of bohemian quarter Vila Madalena, where the night is intense and young.


The district has become the "in" place for the World Cup crowd to let their post-match hair down in a host city where tournament fever is palpable since Brazil beat Croatia in the opening game at Corinthians Arena.

The ongoing FIFA World Cup has seen the rise of a new business in China as people are selling fake sick notes.
Advertisement
"After all those nerves and being surrounded by Brazilians keeping me quiet, now I want to party," hollered 22-year-old Mexican student Pablo Valdes after his country held the hosts to a goalless draw this week.

With a glass of beer in one hand and gripping a Mexican flag in the other, Valdes is swept up in the hordes of people enjoying post-match fun in Vila Madalena.

Putting his arm round a young woman he tells AFP that there's romance, as well as football, on the agenda round these parts.

But it has also become the home of the broken-hearted.

"Last week was terrible," says Spanish supporter Guillermo Chamizo, 27, recalling with a shudder his country's 5-1 thrashing by the Dutch ahead of a further loss to Chile which sealed the defending champions' fate.

"But that's all by the by now -- let's party," grins the engineer, who likely needed another drink after Spain's 2-0 defeat to Chile on Wednesday.

"If Brazil win, I drink caipirinha. If Brazil lose, then I console myself with tequila," she said.

She didn't say if the resulting draw meant mixing both tipples.

The atmosphere lends itself to what the Brazilians call "paquerar" (flirting). Love respects neither borders nor flags as partygoers kiss and embrace with some abandon.

Vila Madalena, a western district of Sao Paulo, with its hundreds of restaurants, bars, fashion stores and art galleries is always packed with people, day and night. Dropping by from time to time is de rigueur for city residents, known as "paulistas."

Sao Paulo may not have the natural beauty nor the beaches of Rio de Janeiro, but it is famously proud of its rich palette of cultural offerings and its seething nightlife.

Vila Madalana has dozens of mobile street bars offering a wide range of refreshments to slake the thirst of the most demanding fan.

Two students from London are here for the week and didn't seem bothered by their lack of game tickets.

"We're here to party. We tried to get a ticket but it was just impossible, So we're going to stay here and watch the games."

"Many people said it was dangerous and there were protests, that we'd get assaulted. But the truth is it's been fantastic," says his friend Sushil Kumar, 25, surrounded by a throng of new friends.

Both are clad in medieval knight's garb, while sports shoes poke out underneath. Part of the look means a sword for one hand -- but the other is free for plastic cup full of beer.

As the pupils in a classroom for the blind quietly follow a French lesson in braille, it is clear that they are impatient to get outside to play football
Advertisement
<< Effectiveness of Antimicrobial Drugs to Treat Cholera Exami...
Worlds Largest Dementia Study Launched in UK >>

Indian Medical Journals Nutam (400mg) (Piracetam) The Essence of Yoga Blood - Sugar Chart Hearing Loss Calculator Post-Nasal Drip Vent Forte (Theophylline) Find a Doctor Accident and Trauma Care Turmeric Powder - Health Benefits, Uses & Side Effects
This site uses cookies to deliver our services. By using our site, you acknowledge that you have read and understand our Cookie Policy, Privacy Policy, and our Terms of Use