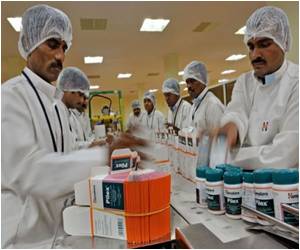 Don't dare call India's biggest herbal healthcare group a maker of "alternative medicine" even though its raw materials are plants and it bases its products on texts dating back millennia.

"It's high time people took us very seriously and did not view us as an alternative form of medicine," says Philipe Haydon, the India chief executive of the Himalaya group from his office in tech and healthcare hub Bangalore.

"This is not a feel-good product. This will save a man's life," he says, taking a box from a stack next to his desk.


It is marked Liv 52, a blend of six herbs used to treat liver disorders, and is one of the firms best-selling products.

In two recent clinical tests, results published in the World Journal of Gastroenterology in 2007 and in the Antiviral Research journal in 2009 showed significant results.

"It so happens that the input material is a herb but the rest of it is very very modern," said the 50-year-old, who joined Himalaya in 1979.

Its air-tight production facility converts truck-loads of fragrant organic matter into eight million tablets a day and 10,000 bottles of medicine.

In the quality control area, men and women in lab coats sit next to conveyor belts as tablets fly past on their way into plastic pots carrying Himalaya's green and orange labels.

In the research and development wing, 250 scientists are working to find new combinations of herbs whose active ingredients are extracted and concentrated to form products that are then tested by humans.

Sales have quadrupled in the last five years to reach 12 billion rupees ($220 million) in 2012. Its target is a billion dollars in annual revenue in the next four years as it spreads into foreign markets.

Ayurvedic medicine -- which means the "science of life" in Sanskrit -- treats the physical and mental sources of illness through, for example, prescribing herbs in conjunction with yoga or massage.

Much of the knowledge, passed on by word of mouth, predates written records, but two volumes of remedies and prescriptions have survived called the Caraka Samhita and the Sushruta Samhita.

"This is where it all begins, these herbal texts that were handed down 3,000 years ago," said Haydon.

"We look at the kind of combinations (of herbs) that are suggested and from that point onwards we have a group of scientists who bring contemporary medicine and science to those texts."

The group now has 75 remedies, including treatments for hypertension, kidney stones and cholesterol.

To raise its profile and revenues, Himalaya branched out in 1996 into consumer products such as shampoos and sun cream.

Like the pharmaceuticals, these use herbs such as neem, a tree known as a "village pharmacy" in rural India due to the range of its medicinal properties.

Dotted around India but centred in the temperate foothills of the Himalayas, 4,000 producers of leaves, roots and plants are busy farming for the group on long-term contracts.

The rejection of the "alternative" tag is partly borne of bitter experience in the West, where regulations on pharmaceuticals mean Himalaya's products are classed as food supplements and thus stocked alongside other treatments that Haydon dismisses as "feel-good products".

If Himalaya must be considered "alternative", he says it should be seen only as an alternative to multi-national pharmaceutical firms.

Overall, the resources are tiny compared with a giant like GlaxoSmithKline which recorded a $7.0-billion profit last year.

And Himalaya holds a mere eight patents having "got out of the patent race" because they offered little protection from competitors who could simply copy a combination, add a new herb and then claim it as a different product.

Jon Tilburt, an expert on modern Western and traditional medicine at the Mayo Clinic healthcare group in the United States, says he understands why Himalaya rejects the "alternative" label.

"There are plenty of herbal companies and all of them in some ways would like to have the esteem of a pharmaceutical company but then none of them wants the regulatory burden," he told AFP.

"They really want their own category of a sort of executive club for herbal players."

Generally the scientific evidence on alternative medicine is mixed, he said, echoing the World Health Organisation which has called for more funding to test traditional treatments from India, Africa or China.

And there are potential dangers that give the herbal industry a bad name.

A study published this month by Graham Lord, a professor of medicine at King's College London, warned about remedies once sold but now banned in the West that contain aristolochic acids linked to kidney failure.

"Herbal remedies around the world are not legislated as medicines," he told AFP. "Because it's herbal, it's not necessarily safe."

But for Himalaya, the future appears bright -- not least because the domestic drugs market is growing at an annual rate of 15 percent, according to the Confederation of Indian Industries.

Wonder Herbs for those Digestion Blues
Traditional Ayurvedic literature emphasizes the importance of good digestion. Good digestion is preferred over good food for long and healthy life. Some people have excellent digestion and can easily digest whatever they eat, while some people have ...
READ MORE