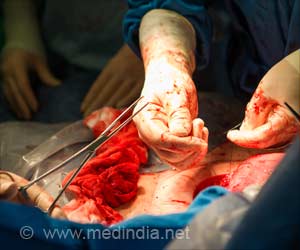 Cesarean delivery can put mothers at a higher risk of severe complications than vaginal delivery, especially for women who are 35 years and older. The findings of the study are published in CMAJ (Canadian Medical Association Journal).

"These results have implications for clinical practice and will be useful in deciding the type of delivery," says Dr. Diane Korb, an obstetrician and epidemiologist with the Robert Debre Hospital and INSERM, Paris, France. "Physicians must consider this increased risk when determining the best way to deliver, especially for older mothers."


Rates of cesarean delivery have increased dramatically over the last 20 years, with more than 1 in 5 women delivering by cesarean, often for medically questionable reasons.


‘Hemorrhage after delivery and reduced ability of the uterus to contract are some of the severe complications that occur due to cesarean delivery in advanced maternal age.’


Although observational studies on cesarean delivery exist, the results may be influenced -- confounded -- by the health condition that required the cesarean rather than the surgical procedure itself.

To understand if cesarean deliveries are associated with severe maternal complications, French researchers used a subcohort of a larger study (the EPIMOMS study) to compare 1444 women who experienced severe complications after delivery with 3464 controls who did not experience complications, in 6 French regions. They controlled for factors that might influence the findings and adjusted for baseline risk. They excluded women with pre-existing health conditions that could lead to complications.

"Our results raise questions about the practices of some obstetricians who perform cesarean deliveries because of advanced maternal age, perhaps with the idea that there will probably be no future pregnancies," says Dr. Korb. "This practice should be modified to avoid unnecessarily exposing women older than 35 to the risk of severe acute maternal morbidity."

"Risk of severe maternal morbidity associated with cesarean delivery and the role of maternal age: a population-based propensity score analysis" is published April 1, 2019.

Pain Management During Labor
The labor pain or pain of childbirth is considered as the one of the most severe types of pain. It was in the mid- nineteenth century the pharmacologic management of labor pain was introduced.
READ MORE