High Blood Pressure May Up Heart Disease, Stroke Risk for People Below 40 Years 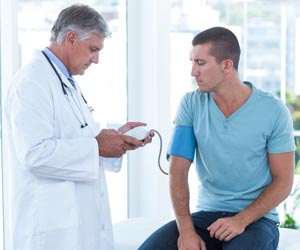 People younger than age 40 who have high blood pressure are at increased risk of heart failure, strokes, and blood vessel blockages as they age, according to a study in JAMA led by Duke Health.

The study, which used new guidelines issued in 2017 that lowered the clinical definition of high blood pressure from earlier levels, suggests that identifying and treating the condition in younger people might have long-term benefit.


‘High blood pressure (Hypertension) in people under 40 may increase the risk of developing heart disease and stroke.’
Read More..


"This is the first step in assessing whether high blood pressure, as defined by the new criteria, is something that younger people should be concerned about as a potential precursor to serious problems," said lead author Yuichiro Yano, M.D., Ph.D., assistant professor in the Department of Community & Family Medicine at Duke.

"Although this is an observational study, it demonstrates that the new blood pressure guidelines are helpful in identifying those who might be at risk for cardiovascular events," Yano said.

Yano and colleagues analyzed more than 4,800 adults who had blood pressure measurements taken before age 40 as part of the Coronary Artery Risk Development in Young Adults study (CARDIA), which began in 1985. About half of participants were African-American, and 55 percent were women.

Study participants were sorted into four groups based on blood pressure levels set in 2017 by the American College of Cardiology and the American Heart Association: Normal (120 or lower systolic blood pressure over 80 diastolic or less); elevated (120-129 over less than 80); stage 1 hypertension (130-139 over 80-89); or stage 2 hypertension (140 or greater over 90 or greater).