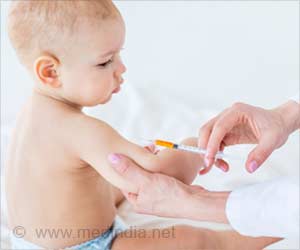 Haemophilus influenzae type b (Hib) vaccinated children were found to have high height for age score, English and Mathematics test scores, according to a new study done by the researchers at CDDEP, the University of California, Riverside and Harvard T.H. Chan School of Public Health.

India accounts for the highest number of HIB cases and Hib- associated deaths in the world. The bacterial pathogen killed an estimated 15,600 Indian children aged 1-59 months in 2015. In a majority of cases, Hib causes pneumonia and bacterial meningitis, which can lead to long-term consequences in children under age five such as stunting, decreased productivity and schooling outcomes, and increased risk of other diseases.

The Hib vaccine protects children against infections like meningitis and pneumonia that are caused by the Haemophilus influenzae type b bacterium.
Advertisement

Hib immunization was incorporated into the pentavalent vaccine in India in 2011 and now protects 88 percent of Indian children under age two, although the Hib burden remains high. While the long-term negative effects of Hib infection in high-income countries are known, little evidence exists on the associated outcomes of Hib infection in low- and middle- income countries.

Overall, results indicate that Hib vaccination prior to age six is associated with improved long-term health, cognition, and schooling outcomes among children in India, which also implies an associated economic gain.

"Hib vaccination is a critical component of the pentavalent vaccine, which was introduced in 2011. Although we tend to focus on short term consequences of immunization, this study shows that the effect of Hib vaccination on schooling and cognitive development can be significant. Denying children vaccines is effectively denying them access to these benefits that persist through their lives" according to study co-author and CDDEP director, Ramanan Laxminarayan.