Rooster Testes Helps to Learn How The Body Combats Viruses

Written by Madhumathi Palaniappan
Medically Reviewed by The Medindia Medical Review Team on April 28, 2017 at 6:11 PM 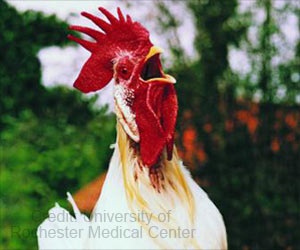 Viruses, bacteria and parasites are foreign invaders that continuously try to attack our body. The research study in the journal eLife may shed light on how the sperm and egg cells would protect themselves against the attackers and pass on the accurate genetic information.

A research team from the University of Rochester Center for RNA Biology may examine the role of piRNA on how to safeguard the integrity of the genetic information in the germ cells.

'Hen Factories' To Synthesize Cancer Drugs
A groundbreaking venture has been initiated by a group of researchers, whereby therapeutic proteins, essential in cancer-treatment, are mass-produced in the egg white of a certain breed of hen.
Advertisement
‘Rooster testes have piRNA (a type of RNA) that helps to fight against viruses and safeguard the integrity of genetic information.’

piRNA is a type of ribonucleic acid(RNA) which is readily found in the testes and ovaries. This would shield the germ cells by silencing the sequences of the viral intruders. A defect or mutation in piRNA would lead to infertility in humans or animals.


Research Study
The research study led by Xin Li, Ph.D., Assistant Professor, University of Rochester School of Medicine and Dentistry analyzed the rooster testes to study about the viruses.

Guinea hen, meat only, raw - Nutrition Facts
Know nutrition and calorie facts in 100gms of Guinea hen, meat only, raw. Includes - total fat, carbohydrates, proteins, vitamins and minerals.
Advertisement
The research team mainly focused on avian leukosis virus, which causes common infections and results in cancers to the domestic chickens. By doing a molecular and genetic analysis, chickens would turn old and cause the existing virus into piRNA-producing machines which pass on genetic information.

When a new avian leukosis virus comes into action, the older one would pump out piRNA and defend the germ cells, thereby ensuring the passage of genetic material to the next generation.

Li, says, "Our study shows how a host can turn a virus into a weapon to fight future viruses."

"Better understanding piRNA may help us target more viruses, both in chickens and in people."

Why is Chicken Used for the Study?
Chicken is capable of acquiring and harboring a wide variety of viruses. Virus is capable of infecting the host chicken. In order to survive, it may insert the genetic material into the chicken's genome.

The inserted virus particle may develop mutations over the years and eventually may become harmless to the animal, but remains to be a part of the genetic material.

About 8 million domestic chickens are consumed every year in the United States. The knowledge of how these birds defend themselves against infections may help to increase the productivity of the poultry industry.

Since, viruses trapped in the chicken's genome are similar to the viruses in the humans. Further research may also help to guide benefiting the human health.

Zika Virus Replicates by Changing a Human Cell
Zika virus infections cause a drastic perturbation of the cytoskeletal network, re-organizing structures that surrounds the replication machinery.

Testicle Pain - Symptom Evaluation
News Archive
News Resource
News Category
Milestone In Voluntary Blood Donation Achieved Samsung Reinvents Toilet for the Poor Which is a Better Form of Exercise: Daily or Weekly? First Phase of Foot-and-Mouth Disease Vaccination Shocking News: Polio Cases Return After a Decade in the US
More News
Sign up for Wellness Consult a Doctor Sign up for Selfcare