Written by Julia Samuel
Medically Reviewed by The Medindia Medical Review Team on February 13, 2017 at 2:16 PM 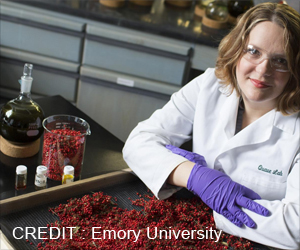 The red berries of the Brazilian peppertree, common in Florida contain an extract with the power to disarm dangerous antibiotic-resistant staph bacteria, scientists at Emory University have discovered.

The journal Scientific Reports is publishing the finding, made in the lab of Cassandra Quave, by an assistant professor in Emory's Center for the Study of Human Health and in the School of Medicine's Department of Dermatology.

Exploring the Benefits of Chili Pepper
Capsaicin has been studied for various medicinal properties including anti-coagulant effects. Chilli peppers and capsicums are rich in vitamin A, C and potassium and are extremely low on calories.
Advertisement
‘The Brazilian peppertree extract works by simply disrupting the signaling of methicillin-resistant Staphylococcus auereus (MRSA) bacteria without killing it.’

"Traditional healers in the Amazon have used the Brazilian peppertree for hundreds of years to treat infections of the skin and soft tissues," Quave says.


"We pulled apart the chemical ingredients of the berries and systematically tested them against disease-causing bacteria to uncover a medicinal mechanism of this plant."

The compound works not by killing the MRSA bacteria, but by repressing a gene that allows the bacteria cells to communicate with one another. Blocking that communication prevents the cells from taking collective action, a mechanism known as quorum quenching.

"It essentially disarms the MRSA bacteria, preventing it from excreting the toxins it uses as weapons to damage tissues," Quave says. "The body's normal immune system then stands a better chance of healing a wound."

The Brazilian peppertree extract works by simply disrupting the signaling of MRSA bacteria without killing it. The researchers also found that the extract does not harm the skin tissues of mice, or the normal, healthy bacteria found on skin.

"In some cases, you need to go in heavily with antibiotics to treat a patient," Quave says.

"But instead of always setting a bomb off to kill an infection, there are situations where using an anti-virulence method may be just as effective, while also helping to restore balance to the health of a patient. More research is needed to better understand how we can best leverage anti-virulence therapeutics to improve patient outcomes."

Peppermint Tea
Peppermint tea sipped at bedtime can be relaxing, makes you feel refreshed and energetic when you drink it in the morning. Peppermint herb has a number of health benefits. Read the article to find out more about peppermint tea.