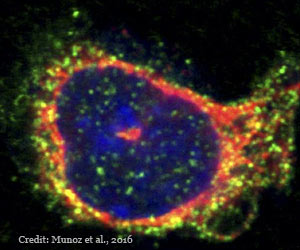 A molecular motor protein that controls the release of inflammatory factors that cause severe and fatal allergic reactions, have been identified by researchers from France.

Two teams of researchers led by Ulrich Blank (CNRS) from the Center of Research on Inflammation (CNRS) and Gaël Ménasché (INSERM) from the Imagine Institute in Paris, France, investigated the role of kinesin-1, a motor protein that transports various cargoes along microtubules.

Allergy - Symptom Evaluation
An allergic reaction may be mild or severe. It usually involves the skin, respiratory system, eyes, digestive system or blood pressure.
Advertisement
‘The motor protein Kinesin-1 that transports secretory granules along micrtubules could be the new therapeutic target for controlling severe and deadly allergic reactions.’

The study, Kinesin-1 controls mast cell degranulation and anaphylaxis through PI3K-dependent recruitment to the granular Slp3/Rab27b complex which will be published online in The Journal of Cell Biology, suggests that targeting this motor protein may be a new way to treat patients undergoing anaphylactic shock.


Mast cells are a type of white blood cell localized in most tissues of the body that fight off parasitic infections by releasing histamine and other inflammatory factors contained in secretory granules.

Anaphylaxis
Anaphylaxis, the acute life-threatening allergic reaction caused by insect bites or eating certain foods, requires immediate emergency treatment as it can be fatal.
Advertisement
Allergens can also trigger granule release, and, if this happens simultaneously in mast cells throughout the body, it can provoke a life-threatening anaphylactic response. This leads to facial swelling, difficulty breathing, a drop in blood pressure, fainting and eventually death.

At present, the main treatment for anaphylaxis is to immediately inject patients with epinephrine using devices such as the EpiPen from the pharmaceutical company Mylan NV.

When mast cells are activated by allergens bound to immunoglobulin E antibodies, secretory granules move along microtubules to the periphery of the cells, where they can fuse with the plasma membrane and release their contents.

The motor protein Kinesin-1 transports secretory granules containing histamine and other inflammatory factors to the cell periphery along microtubuless.

The researchers created mice in whom a key sub-unit of kinesin-1 called Kif5b was removed from the mast cells. They then became less sensitive to allergen-induced anaphylaxis.

Their mast cells showed lower levels of secretory granule release because the granules were no longer transported to the plasma membrane upon mast cell activation.

Life-Threatening Allergic Reaction Increasing Among Children
The percentage of emergency department visits due to anaphylaxis doubled over a four-year period based on data collected from the Montreal Children's Hospital.

Protein Produced by Mast Cells can Predict Risk of Life Threatening Complications Among Dengue Patients
A joint study reveals that the risk of life threatening complications among people infected with dengue virus could be predicted by a protein that is produced by mast cells in the immune system.