Written by Madhumathi Palaniappan
Medically Reviewed by The Medindia Medical Review Team on November 9, 2016 at 12:02 PM 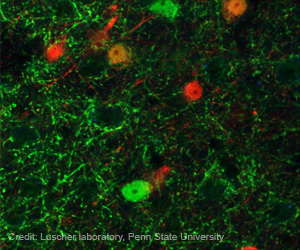 The research study is published online in the Journal Molecular Psychiatry.

Depression
Depression is one of the most common mental disorders affecting approximately 340 million people in the world. No one is immune from depression - it occurs in people of all social classes, all countries and all cultural settings.
Advertisement
‘GABA enhancing drugs could serve as effective and rapidly acting antidepressants.’

Bernhard Luscher, professor of biology and biochemistry and molecular biology at Penn State said, "GABA is the major inhibitory neurotransmitter in the brain -- it acts as the "brakes" of neural activity -- and its dysfunction is implicated in a wide range of neuropsychiatric disorders."


"Increasing evidence suggests that dysfunction of GABA is also a major culprit in major depressive disorder, the most common and costly brain disorder and a principal cause of suicide, the primary cause of death among young people."

Antidepressants Use during Pregnancy
Depression is common during pregnancy and antidepressants are usually prescribed to overcome it. Is it safe to take these drugs while pregnant?
Advertisement
The research study was carried out by disabling the GABA receptor in a specific neuron which causes depressive disorder and increases the GABA signaling.

Under normal conditions the SST+ interneurons (somatostatin-positive-GABAergic interneurons) are capable of producing GABA, which lowers the activity of other neurons surrounding them.

Surrounding neurons release glutamate neurotransmitter which acts as an accelerator of neuron activity. Scientists disabled the GABA receptor in the SST+ interneurons, which could no longer receive signal as their brakes were removed, this led to the excess release of GABA which thereby slows down the glutamate producing neuron activity.

Mice who received this treatment were found to act as if they had been treated with antidepressant drugs.

The biochemical changes in the genetically altered mice brain was found to be similar to that of the mice which were subjected to different classes of antidepressant drugs.

Luscher said, "Interestingly, drugs that are designed to increase the function of GABA -- the benzodiazepines -- are widely used as potent anti-anxiety drugs and sedatives, but for reasons that are poorly understood these drugs are largely ineffective as antidepressants."

Currently used antidepressant drugs were found to enhance the functions of serotonin. These drugs are ineffective because of slow signs of improvement, and are capable of only normalizing the defects in the GABA transmission.

The author said that the GABA producing neurons were found to be characterized by somatostatin and represents around 30% of GABA producing cells in the forebrain.

"These cells have recently been implicated in major depression based on gene-expression changes found in postmortem brain tissue from depressed patients, and they differ from other GABA-producing cells in that they selectively innervate the dendritic trees of glutamate-releasing neurons. The somatostatin-positive subset of GABA-releasing cells therefore appear ideally suited to limit the overexcitation of neural networks that occurs during the chronically stressful situations that figure as major culprits in depressive disorders." he added.