Miniature Device Could Show Effectiveness of Cancer Drugs on Tumors

Written by Shirley Johanna
Medically Reviewed by The Medindia Medical Review Team on December 17, 2016 at 3:56 PM 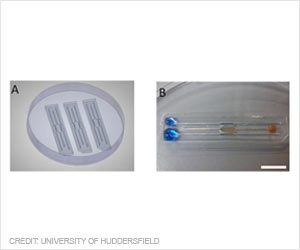 
A miniature lab device that could speed up the adoption of new anti-cancer treatments has been developed by researchers at the University of Huddersfield.

Advertisement
‘The microfluidic device gives researchers the chance to see tumor cells and how drugs interact in the microscopic environment.’

The device is a small, versatile and simple-to-use microfluidic system. It consists of a series of chambers that allow researchers to monitor the response of hypoxic cells (deficient in oxygen and therefore resistant to therapy) when drugs are introduced.


The microfluidic device was developed by Professor Roger Phillips and Dr Simon Allison at the University of Huddersfield formed a collaboration with researchers in Spain - based at institutions that include the Aragon Institute of Biomedical Research.
Advertisement
Evaluation of Anti-Cancer Drugs in Microfludic Device

The device is made of glass which enables researchers to visualize the microenvironment and monitor the response of tumor cells to the anti-cancer drug.

The test cells grown in the lab can be spheroid. The 3D nature cells inside the microfluidic device allow the researchers to visualize what is happening to them internally while interacting with the drug, explained Professor Phillips, specialist in the evaluation of new anti-cancer drugs.

"We can see the drugs moving in, and see hypoxia developing in the center," said Professor Phillips. The microfluidic device could also be used for a wide range of other applications.

In the recent years, there have been major improvements in knowledge of cancer cell biology, but clinical approval of new drugs has not kept pace. Development of in vitro preclinical models that are better predictors of success in advanced preclinical and clinical testing could speed up the drug adoption process.

The researchers hope that the microfluidic device could help address the urgent need for new in vitro model to mimic the key aspects of the tumor microenvironment and therefore allow early assessment of the anti-cancer drugs, speeding up the adoption of those that are shown to be therapeutically effective.

Researchers have described the microfluidic device in Scientific Reports, from the publishers of leading journal Nature, titled "Development and characterization of a microfluidic model of the tumor microenvironment."

In Treating Wet AMD, Cheaper Anti-cancer Drug Equally Effective as Expensive Drug
In treating the most common cause of blindness in older adults, an anti-cancer drug has been proven ...

Heart Dysfunction Caused by Powerful Anti-Cancer Drug may be Reduced by Dietary Inorganic Nitrate
Nutrient supplementation, like the kind that is found in leafy greens, spinach and lettuce, may ......