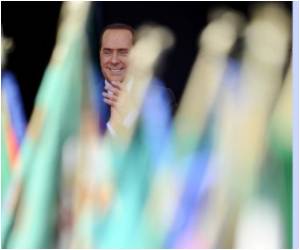 So, the moment you think he's settled down - Berlusconi springs yet another surprise at you. Age-defying Italian Prime Minister Silvio Berlusconi, billionaire that he is, is now the main shareholder of a company developing anti-cancer drugs, Italian daily La Repubblica said on Wednesday.

Berlusconi, who is 73 and has overcome prostate cancer and a heart condition, recently said at a political rally that he and his government wanted "to win the battle against cancer."


The prime minister "was really and secretly cultivating the project, along with his anxious chase of immortality," La Repubblica said.


He often boasts about his health and has said that he will not even discuss a possible political successor until 2020.

Berlusconi raised his stake in Molmed, a company that is in the advanced stages of testing two cancer drugs late last year through his holding company Fininvest.

Berlusconi now owns 24 percent of the company and he has named his youngest son Luigi, 21, on the company's board of administrators.

Leonardo Del Vecchio, the 75-year-old founder and chairman of eyewear giant Luxottica and Italy's second richest man, is also an investor in the company.

Alarming Divorce Rates in Italy
Divorce rates in Italy seem to have gone through the roof, as increasing numbers seem to be following in the footsteps of their Prime Minister, who is in the midst of a second marital split.
READ MORE

Abortion Pill Cleared for Sale in Italy Despite Protests
The sale of the RU486 abortion pill in Italy was given a final green light on Wednesday, despite protests from the Vatican and members of Prime Minister Silvio Berlusconi's government.
READ MORE