Pregnant women who consumed a DHA (docosahexaenoic acid) supplement are more likely to have children with higher fat-free body mass, finds a study conducted by a research team from the University of Kansas.

The findings of the study published in the American Journal of Clinical Nutrition, suggest that improving maternal DHA nutrition can have a favorable impact on the developing fetus that influences body composition in early childhood.
Maternal DHA Intake Linked to Higher Fat-free Body Mass in Children

The study involved 157 women with low-risk pregnancies from the Kansas City. They were enrolled for a study at KU Medical Center's Maternal and Child Nutrition and Development Lab between March 2006 and September 2009. The research team randomly assigned half of the participants to a prenatal DHA supplement of 600 mg, and the other half were given a placebo.


‘DHA supplement during pregnancy plays a role in promoting a leaner, healthier growth outcome for children.’


After a period of five years, children born to those pregnant women were tested using the BodPod, an Air Displacement Plethysmograph that uses whole body densitometry to determine body composition (fat and fat-free mass). The research team found that children born to mothers who took the DHA supplements during pregnancy had an average of 1.3 pounds (500g) more fat-free mass, but the same amount of fat at age 5 compared with the placebo group.

"While we don't know the mechanism for the finding, We do know that the balance of omega-3 and omega-6 fatty acids early in development can influence the balance of muscle and fat cells," said Carlson Susan Carlson, professor in the Department of Dietetics & Nutrition in the School of Health Professions.

"The number of muscle fibers is believed to be set by term birth." Carlson's co-author, John Colombo, professor of psychology and director of KU's Life Span Institute.

Colombo noted that the study makes two important contributions. The first contribution is about DHA. It is well-known that DHA is associated with improvements in visual, Cognitive and behavioral development in early life. But the study findings suggest that DHA may also have a role in promoting a leaner, healthier growth outcome in children. The second contribution is that the results of the study show the conditions that children experienced during the time that their mothers were pregnant with them are associated with their body composition almost six years later.

Colombo said, "To me, that's astonishing -- staggering, really. Those of us working in the field of developmental science are seeing results that suggest the prenatal environment and prenatal conditions have meaningful, long-term effects on human development. Quite simply, these results add to that mounting evidence. I think we'll learn that much more of how we 'end up' may be strongly influenced or determined by what happens before we are born."

The findings of the study add evidence to another observational study conducted in the United Kingdom, said Carlson.

What is DHA?
DHA is an omega-3 fatty acid, which is essential for the growth and functional development of the brain in infants. DHA plays a key role in the maintenance of normal brain function in adults. A diet rich in DHA improves learning ability, cognitive and behavioral development. Lack of DHA in the diet is associated with fetal alcohol syndrome, attention deficit hyperactivity disorder (ADHD), cystic fibrosis, phenylketonuria, unipolar depression, and adrenoleukodystrophy.

DHA is present in fatty fish like salmon, tuna, mackerel and mother's milk. Meat and eggs also have low levels of DHA. The requirement of DHA increases in the last trimester of pregnancy and the first two years of life. DHA is needed for optimal health during early development. DHA can be delivered to the fetus by increasing maternal intake during pregnancy and to breastfed infant by increasing DHA intake during lactation.

DHA-Rich Diet Can Improve Memory - Study
Eating fish has always been linked to good health but a recent study has established that DHA, an omega-3 fatty acid that is found in fish, can sharpen our memory!
READ MORE 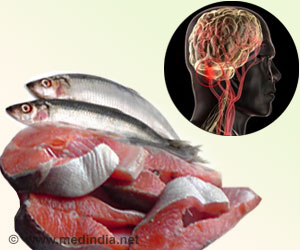 Oily Fish Is Essential For Brain Development: Study
A study has highlighted the importance of consuming oily fish for the development of brain.
READ MORE

DHA may Boost Memory and Learning Among Senior People
A new study has revealed that docosahexaenoic acid (DHA) is found to be effective in improving memory and learning in senior people who are victims of mild cognitive impairments.
READ MORE