Keyhole surgery to repair ruptured aortic aneurysm is cost effective and has better outcomes. A randomised trial comparing the use of keyhole (endovascular) aneurysm repair versus traditional open surgery suggests that keyhole surgery should be adopted more widely.

Abdominal aortic aneurysm is a swelling of the aorta - the main blood vessel that leads away from the heart, down through the abdomen to the rest of the body. If the artery wall ruptures, the risk of death is high, and emergency surgery is needed.
Keyhole Surgery Shows Better Outcomes For Ruptured Aneurysm


Recently, three European randomised trials showed that keyhole repair does not reduce the high death rate up to three months after surgery compared with open repair. However, mid-term outcomes (three months to three years) of keyhole repair are still uncertain.


‘Early higher average quality of life, coupled with the lower mortality at three years, led to a gain in average quality adjusted life years in those who underwent keyhole surgery.’

So an international research team set out to assess three-year clinical outcomes and cost-effectiveness of a strategy of keyhole repair (whenever the shape of the aorta allows this) versus open repair for patients with suspected ruptured abdominal aortic aneurysm who were part of the IMPROVE trial.

The trial involved 613 patients from 30 vascular centres (29 in the UK, one in Canada) with a clinical diagnosis of the ruptured aneurysm, of whom 316 were randomised to a strategy of keyhole repair and 297 to open repair.

The findings include: The researchers point to some study limitations, such as sample size and midterm data focusing on aneurysm-related events, which may have led to some bias.

Nevertheless, they say compared with open repair, "an endovascular strategy for suspected ruptured abdominal aortic aneurysm was associated with a survival advantage, a gain in QALYs, similar levels of reintervention, and reduced costs, and this strategy was cost-effective."

"These findings support the increasing use of an endovascular strategy, with wider availability of emergency endovascular repair," they conclude.

However, he points out that prevention is always better than cure - the most effective way to prevent ruptured AAA is to avoid smoking, he says, followed by early recognition and repair of aneurysms before rupture. There are still knowledge gaps to be dealt with in future studies, he concludes.

Abdominal Aortic Aneurysm
The dilatation and localized bulging of a part of aorta in the abdominal part of patient's body owing to weakness of its walls is called abdominal aortic aneurysm.
READ MORE

Aneurysm
An aneurysm is an abnormal "ballooning" in blood vessels usually in the wall of arteries.
READ MORE 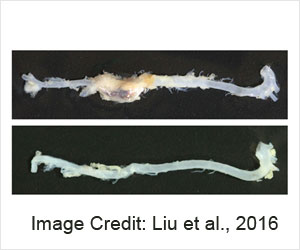 Low-Calorie Diet Reduces the Risk of Abdominal Aortic Aneurysm
Abdominal aortic aneurysm is the enlargement of an artery in the abdomen. Following a low-calorie diet may reduce the risk of developing the fatal condition.
READ MORE