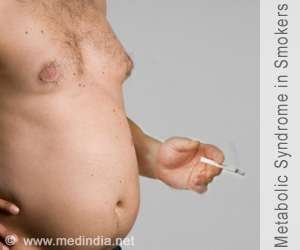 Tobacco is known to be the second main cause of deaths around the world. Every year about 5 million people die due to tobacco intake. In simple words, 1 out of 10 adults die because of tobacco.

Tobacco is the single preventable cause of death as against the top five factors for mortality.

Globally, smoking is an important cause of mortality and morbidity. It is unanimously accepted as the main cause of cardiovascular and metabolic disease. Since the sensitivity to insulin is reduced and insulin resistance is increased by smoking so the risk of cardiovascular disease is also enhanced. Smoking elevates plasma triglycerides, causes hypoglycemia and lowers high-density lipoprotein cholesterol. Researchers have revealed that smoking is often related with rise in risk of Metabolic Syndrome and metabolic anomalies.


Hellas Cena and colleagues conducted a cross-sectional study that was published in BMC, to assess the prevalence of Metabolic Syndrome among smokers.

The scientist enrolled people in age group of 28 to 70 years and who were smoking since last 10 years.

The volunteers did not have any history of diabetes or coronary artery disease or heart disease (CVD).

The researchers observed that the occurrence of metabolic syndrome was 53.1 percent of which 44.9 percent were in females and 57.3 percent in males respectively.

Rise in variables such as systolic blood pressure, HDL cholesterol and fasting plasma glucose levels was noted in light and heavy smokers.

Finally the researchers advocated that smokers are predisposed to a high threat of metabolic syndrome. They said that proactive interventions are needed to encourage smokers to quit smoking.

People with Metabolic Syndrome and Heart Disease can Eat Eggs
Overweight or with heart disease? Doesn't matter, egg can be a part of your diet, say researchers.
READ MORE

Relationship Between Metabolic Syndrome and Inflammatory Biomarkers
Metabolic syndrome poses a threat for the development of coronary heart disease and fat deposition. The disease is clinically manifested with hypertension, hyperglycemia, hypertriglyceridemia,obesity.
READ MORE

Biomarkers, Modern Medicine`s New Tools
In the past few decades an outburst in the discovery of biomarkers for diagnosis, disease monitoring, and prognostic evaluation has been observed.
READ MORE

Syndrome X
"Syndrome X" or "Metabolic syndrome" is a group of conditions that puts a person at risk for diabetes and heart disease. With Syndrome X, the risk of developing heart disease jumps twenty fold.
READ MORE

Diet Lifestyle and Heart DiseaseMetabolic SyndromeAntioxidants to Help You When You Quit SmokingSyndrome XFatty Liver Disease: A Growing Health Problem in IndiaTop Ten Reasons Why You Should Eat BreakfastTop 10 Ways to Speed up Your Metabolism For Weight LossLatent Autoimmune Diabetes (LADA)