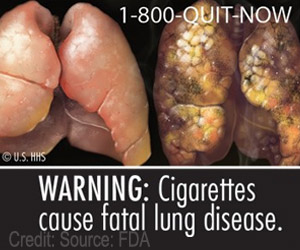 Using prominent, graphic pictures on cigarette packs warning against smoking could avert more than 652,000 in the U.S. over the next 50 years.

Researchers from Georgetown Lombardi Comprehensive Cancer Center say that it can also reduce up to 92,000 low birth weight infants, up to 145,000 preterm births, and about 1,000 cases of sudden infant deaths.

Gambling Linked to Use of Alcohol, Cigarettes, Cannabis in Teenagers
High prevalence of gambling among teenagers is linked to 'risk-taking behavior' such as use of alcohol, cigarettes, or cannabis.
Advertisement
‘Pictorial warning labels, helped in increased smoking cessation and reduced smoking initiation and prevalence. That would lead to significant reduction of death and morbidity, as well as medical cost.’

The study, published online in the journal Tobacco Control, is the first to estimate the effects of pictorial warnings on cigarette packs on the health of both adults and infants in the U.S.


Although more than 70 nations have adopted or are considering adopting the World Health Organization's Framework Convention for Tobacco Control to use such front and back of-the-pack pictorial warnings  an example is a Brazilian photo of a father with a tracheotomy  they have not been implemented in the US.

Currently, a text-only warning appears on the side of cigarette packs in the U.S.

The study used a tobacco control policy model, SimSmoke, developed by Georgetown Lombardi's David T. Levy, PhD, which looks at the effects of past smoking policies as well as future policies.

SimSmoke is peer-reviewed, and has been used and validated in more than 20 countries.

In this study, Levy and his colleagues, who included investigators at the University of Waterloo, Ontario, and the University of South Carolina, looked at changes in smoking rates in Australia, Canada and the United Kingdom, which have already implement prominent pictorial warning labels (PWLs).

The study found that eight years after PWLs were implemented in Canada, there was an estimated 12% - 20% relative reduction in smoking prevalence.

The researchers used these and other studies and, employing the SimSmoke model, estimated that implementing PWLs in the U.S. would directly reduce smoking prevalence in relative terms by 5% in the near term, increasing to 10% over the long-term.

"The bottom line is that requiring large pictorial warnings would help protect the public health of people in the United States," says Levy, a professor of oncology.

"There is a direct association between these warnings and increased smoking cessation and reduced smoking initiation and prevalence. That would lead to significant reduction of death and morbidity, as well as medical cost."the professor added.

Outrage Over Delay in Implementation of Pictorial Warnings on Tobacco Products
As per an earlier GOI notification, the new pictorial health warnings that were to be implemented from 1 June 2010, have been further delayed till 1 December 2010.

Blood - Sugar Chart Pregnancy Confirmation Calculator Vent Forte (Theophylline) Turmeric Powder - Health Benefits, Uses & Side Effects Find a Doctor The Essence of Yoga Accident and Trauma Care Daily Calorie Requirements How to Reduce School Bag Weight - Simple Tips Selfie Addiction Calculator
This site uses cookies to deliver our services. By using our site, you acknowledge that you have read and understand our Cookie Policy, Privacy Policy, and our Terms of Use