Written by Julia Samuel
Medically Reviewed by The Medindia Medical Review Team on January 23, 2017 at 1:01 PM 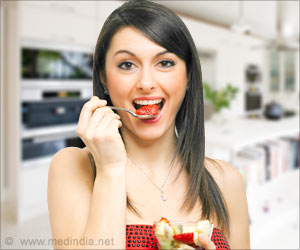 Digestion begins in the mouth, as the food enters. The food is broken down to small particles on chewing and saliva is secreted.

Scientists have shown that chewing your food properly can boost your mouth's immune system to protect you against illness.

Chew Your Food Well
The common trend is to grab a bite on the run - make some time to eat well, so the running is more efficient.
Advertisement
‘Mastication or chewing stimulates Th17 cells which are important in protecting against bacterial and fungal infections that are commonly found in the mouth.’

The study led by teams at The University of Manchester and National Institutes of Health in the USA, revealed that a specific type of immune cell, the Th17 cell, can be stimulated when you chew.


The immune cell is important in protecting against bacterial and fungal infections that are commonly found in the mouth . Although it has long been known that the nutrients from food can support a healthy immune system the findings establish that the action of eating itself is important too.

Shape of Human Chin is due to Evolution, Not From Mechanical Forces Such As Chewing
Over a few millennia, our faces have become smaller and the chin took on a bony prominence, more like an adapted pointy emblem at the bottom of our face.
Advertisement
In other parts of the body, such as the gut and skin, Th17 cells are stimulated by the presence of friendly bacteria; it was previously assumed this was the case in the mouth.

Lead researcher and biologist Dr Joanne Konkel, from The University of Manchester, said, "The immune system performs a remarkable balancing act at barrier sites such as the skin, mouth and gut by fighting off harmful pathogens while tolerating the presence of normal friendly bacteria." "Our research shows that, unlike at other barriers, the mouth has a different way of stimulating Th17 cells: not by bacteria but by mastication. Therefore mastication can induce a protective immune response in our gums".

However, the team found that damage caused by the abrasion of chewing induced factors from the gums that could activate the same pathways as friendly bacteria and act upon Th17 cells.

However, stimulation of Th17 cells for immune protection can be a double-edged sword: too many Th17 cells can contribute to periodontitis - a common gum disease that is linked to complications in lots of diseases including diabetes, rheumatoid arthritis, heart problems and pre-term birth.

In the journal Immunity, the team show that they were able to stimulate increases in Th17 cells in mice by merely changing the hardness of their food, proving that mastication was the critical factor.

But these Th17 cells also had a bad side; "We were also able to show that increased damage from mastication could also exacerbate bone loss in periodontitis".

She added: "Importantly, because inflammation in the mouth is linked to development of diseases all around the body understanding the tissue-specific factors that regulate immunity at the oral barrier could eventually lead to new ways to treat multiple inflammatory conditions"

The 'Crunch Effect': Sounds of Eating May Reduce How Much You Eat
The noise your food makes while you're eating can have a significant effect on how much food you eat.

Gum-chewing Habit Might be Behind Fergie's Spectacular Success: Research
According to research at Japan's Institute of Radiological Sciences, Manchester United manager Sir Alex Ferguson's habit of chewing gums is good for the brain, as it speeds up thinking.

How to Reduce School Bag Weight - Simple Tips Blood Donation - Recipients Blood Pressure Calculator Post-Nasal Drip Find a Hospital A-Z Drug Brands in India Drug Side Effects Calculator Turmeric Powder - Health Benefits, Uses & Side Effects Find a Doctor Diaphragmatic Hernia
This site uses cookies to deliver our services.By using our site, you acknowledge that you have read and understand our Cookie Policy, Privacy Policy, and our Terms of Use  Ok, Got it. Close
×