Association Between the 2 Key Proteins of Alzheimer's Explained

Written by Shravanthi Vikram
Medically Reviewed by The Medindia Medical Review Team on March 22, 2018 at 8:08 PM 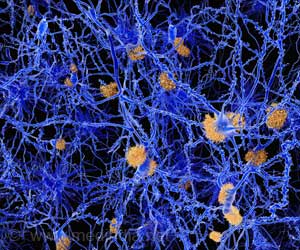 Earlier studies have shown that Alzheimer's disease may be caused due to accumulation of amyloid beta (sticky protein) in the brain. However, many old people who have such plaques but do not have dementia. The confusion and memory loss in Alzheimer's patients is associated with protein called Tau. Earlier the relationship between amyloid beta and tau was not known but now a new study at Washington University School of Medicine in St. Louis indicates that people with more amyloid protein in the brain produce more tau. The findings of the study are published in the journal Neuron .

Diseases Related to Old Age
Ageing is referred to the accumulation of changes that brings a person closer to death.
Advertisement
‘Memory loss and confusion in Alzheimer's patients is due to the presence of Tau protein. There is a strong link between tau protein and amyloid beta protein.’

Earlier scientists detected that people with Alzheimer's disease had high levels of tau protein in the cerebrospinal fluid (fluid that surrounds the brain and spinal cord). The Tau protein was usually present inside the dells. Since Alzheimer's disease destroyed the brain cells (neurons), the researchers assumed that the excess of tau outside the cells was a byproduct of the dying neurons.


To find the source of the excess tau, researchers used a technique called SILK (Stable Isotope Labeling Kinetics) to measure the amount of tau that was produced and cleared from human brain cells.

Modified Atkins Diet: All You Need to Know
Modified Atkins diet designed for weight loss and to treat seizures is high in fat and low in carbohydrates. Discover how this diet is different from the ketogenic diet.
Advertisement
This technique helps to track, how fast the proteins are synthesized, released and cleared from the neurons. It can be measured in the lab or directly on the central nervous system.

Using the technique the scientists detected that the tau proteins consistently appeared after a three-day delay in human neurons in a laboratory dish. This indicated that the release of tau was an active process and was not related to the death of neurons.

A study was conducted, about 24 people who exhibited amyloid plaques and mild Alzheimer's symptoms participated in the study. The results showed that there was a direct correlation between the amount of amyloid in a person's brain and the amount of tau produced in the brain.

"Whether a person has symptoms of Alzheimer's disease or not, if there are amyloid plaques, there is increased production of this soluble tau," Bateman said.

The study helps to understand how the two key proteins in Alzheimer's disease - tau and amyloid interact with each other.

"We knew that people who had plaques typically had elevated levels of soluble tau," Bateman said. "What we didn't know was why. This explains the why: The presence of amyloid increases the production of tau".

About Alzheimer's Disease
Alzheimer's is a progressive disease that destroys memory and other important brain functions. In this condition the brain nerve cells are destroyed which leads to the decline of mental function. The common symptoms of the disease are memory loss, confusion, difficulty in speaking and writing, behavior changes and poor judgment. The risk factors associated with Alzheimer's are high blood pressure, diabetes and heart diseases.

Advertisement
<< Pain Relieving Menopausal Hormonal Therapy May Benefit The B...
Lack of Vitamin D May Up Metabolic Syndrome Risk in Women Af... >>

The Essence of Yoga Blood - Sugar Chart Selfie Addiction Calculator Post-Nasal Drip Indian Medical Journals Drug Side Effects Calculator Find a Doctor Iron Intake Calculator Noscaphene (Noscapine) Nutam (400mg) (Piracetam)
This site uses cookies to deliver our services. By using our site, you acknowledge that you have read and understand our Cookie Policy, Privacy Policy, and our Terms of Use