Written by Dr. Lakshmi Venkataraman, MD
Article Reviewed by The Medindia Medical Review Team on May 8, 2018 at 3:47 PM
Health In Focus

The UTY gene on Y chromosome is a tumor suppressor gene and protects against development of acute myeloid leukemia (AML) and other cancers, according to a recent study by scientists at the Wellcome Sanger Institute and the University of Cambridge.
Y Chromosome Gene Found To Have Protective Effect Against Acute Leukemia


The findings of the study, appear in Nature Genetics.

Thus, the study has uncovered a probable mechanism of how UTX gene loss leads to AML and other cancers in older males.


‘Findings of the study may help development of targeted therapies for acute myeloid leukemia away from the intensive chemotherapy regimens that are often ineffective.’


Dr Malgorzata Gozdecka, the first author on the study from the Wellcome Sanger Institute, said: "This is the first Y chromosome-specific gene that protects against AML. Previously it had been suggested that the only function of the Y chromosome is in creating male sexual characteristics, but our results indicate that the Y chromosome could also protect against AML and other cancers."

Professor Brian Huntly, joint project leader from Cambridge University and Consultant Haematologist, at Cambridge University Hospitals NHS Trust, said: "It is known that men often lose the Y chromosome from their cells as they age, however the significance of this was unclear. Our study strengthens the argument that loss of the Y chromosome can increase the risk of cancer and describes a mechanism for how this may happen."


About X and Y Chromosomes - In Brief

Acute myeloid leukaemia is an aggressive form of blood cancer that can occur at any age. In AML the normal precursors of blood cells in the bone marrow are entirely replaced by leukemic cancer cells with resultant anemia, bleeding and recurrent life threatening infections.

According to Dr George Vassiliou, joint project leader from the Wellcome Sanger Institute and Consultant Haematologist at Cambridge University Hospitals NHS Trust,  "Treatments for AML have not changed in decades and there is a large unmet need for new therapies. This study helps us understand the development of AML and gives us clues for developing new drug targets to disrupt leukaemia-causing processes. We hope this study will enable new lines of research for the development of previously unforeseen treatments and improve the lives of patients with AML."

Thus, the findings of the study have uncovered hitherto unknown role of the Y chromosome specific genes such as the UTY gene. This knowledge may throw light on the mechanisms of cancer formation and pave the way for future research and development of targeted therapies that might be more effective and improve the outcome for these patients. 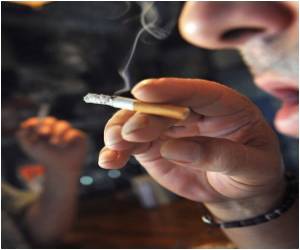 Loss of Y Chromosome Behind Smokers' Increased Cancer Risk: Study
An association between smoking and loss of the Y chromosome in blood cells that increases the risk of developing cancer in males, reveals a new study.
READ MORE

Risk of Cancer in Males Increased by Y Chromosome Loss
The loss of Y chromosome, previously considered as a normal part of aging in men, can actually increase the risk of developing cancer.
READ MORE

Genes on the Y Chromosome Prove Essential for Survival of Men
The human Y chromosome has over the course of millions of years of evolution managed to preserve a small set of genes that has ensured not only its own survival but also the survival of men, despite a well-documented history of dramatic genetic ...
READ MORE