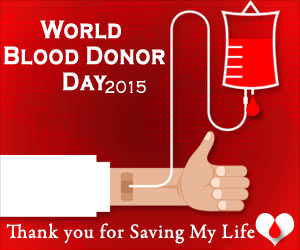 The World Blood Donor day is observed on the June 14 every year. The theme for this year's event is "Thank you for saving my life". The day focusses on expressing gratitude to all those who have donated blood during their life. Italso highlights the importance of blood donation and encourages individuals to donate blood more often with the slogan "Give freely, give often. Blood donation matters."

Blood donation is one of the simplest way you can save another person's life.The only heroism that you have to perform here is to bear the prick of a needle. Once the blood is donated, it goes to a blood bank where it is tested. Blood is either stored as whole blood, or is separated into components like packed red blood cells, plasma or platelet concentrate. These are used as and when there is request from a patient or a hospital.


Though everyone understands the importance of blood donation, there is still a lot of apprehension when it comes to voluntary blood donation. According to the World Health Organisation (WHO), most of the blood donations come from high-income countries which actually make up for a small proportion of the population. However, the number of voluntary unpaid blood donors has increased in the recent years especially in South-East Asia and Africa. Non-remunerated blood donation is considered as the best form of blood donation since there is more chance of the blood being safe and without disease.


Perhaps the major hurdle that prevents individuals from donating blood is the lack of awareness of several issues regarding blood donation. For example, some people feel that they may get infected with HIV if they donate blood. However, standard blood banks used sterile disposable sets, which do not transmit infection.

The current situation in several countries is such that the blood requirement is much more that what is available. If we take just road traffic accidents, several of these patients require blood transfusions. Also patients with blood disorders like thalassemia need a constant supply of blood products.

The theme for this year's World Blood Donor Day celebrates the numerous people who give blood out of their own free will in the interest of others. Once, you give blood voluntarily, you usually do not know who will benefit from your good deed. It is possible you helped a breadwinner of a family or allowed a child to live longer. On the June 14, 2015, the recipients of blood transfusion as well as the community thank you for your selfless gesture.

Five minutes of your time + 350 ml. of your blood = One life saved. And blood is meant to circulate so pass it around.

Quiz on Blood Donation
As there is no substitute for human blood, Blood donation is one of the noblest of human actions; a simple gesture to help a needy stranger. If you have any apprehensions or queries on the facts of blood donation, take our Blood Donation quiz; ...
READ MORE