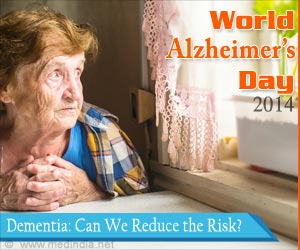 Alzheimer's month offers a longer time period for raising awareness of what is Alzheimer's disease, Alzheimer's symptoms and options available in Alzheimer's treatment and medication; the month-long campaign with several events focusing on Alzheimer's awareness culminates with a grand finale on 21st September, World Alzheimer's Day.

"Dementia: Can we reduce the risk?" is the theme for World Alzheimer's Month 2014. The theme is designed to turn the focus on ways in which people can reduce the risk of developing dementia through brain healthy lifestyles.


What is Alzheimer's Disease?

Dr. Aloylus "Alois" Alzheimer, the German psychiatrist and neuropathologist, identified the first case of "presenile dementia", which was then called Alzheimer's disease. The disease is classified as a neurodegenerative disorder. Alzheimer's treatment is symptomatic and stopping or reversing the progress of the disease is not yet possible.

Dementia refers to a group of disorders that impairs mental functioning like memory, thinking, behavior and emotion. Alzheimer's disease is the most common form of dementia among older adults. Early Alzheimer's symptoms include short term memory loss, difficulty in performing known tasks, changes in personality and language problems.

Alzheimer's disease progresses slowly over several years through mild, moderate and severe stages. When the disease is in mild stages, there is difficulty in remembering things, making decision and finding one's way around in new places. There is trouble with complex tasks like planning an event and difficulty in coming up with the right words to express.

If the disease progresses, the moderate stage of Alzheimer's disease involves worsening of memory. Trouble with language, thought process, forgetting known people, losing track of the day of the week or where they are, forgetting details like one's own address and phone number, etc are the usual symptoms seen. The disease could further progress and the affected person could have delusions and hallucinations. Paranoid behaviors, depression or violent behaviors are also common.

The third stage of Alzheimer's disease presents with symptoms like not being able to do daily activities of walking, controlling bowels or bladder, etc. Sometimes the person may initiate the task he intends to do, but then suddenly forgets what he intended to do. The person may not be able to speak more than half a dozen words, could know familiar faces but have trouble remembering their names and even have some stereotype habits like wringing hands or shredding tissues.

What can be done on World Alzheimer's Day 2014?

Some of the events that can be organized for marking the day include:

1. Call people with dementia and their carers to come together for a social support meeting. They can share their experiences and suggest tips to each other. A professional can be invited to give a talk on the medical and rehabilitation aspects also.
2. Include information about Alzheimer's disease in community newsletters, notice boards, parks, schools and churches.
3. Arrange a medical professional or a volunteer worker who has contributed towards the cause to share their experiences in schools, corporate, social gatherings and community events.
4. Select a special dress code to commemorate World Alzheimer's Day 2014, on September 21st.
5. Organize walkathons or marathons to show support for not only the person affected with Alzheimer's disease, but also the caregivers and family.
6. Fund-raising events like sports, cultural and carnivals can help provide financial support to those who cannot afford the Alzheimer's treatment and care.

There are individual differences in the way in which Alzheimer's symptoms present themselves. Cognitive and physical changes may be slower or faster in one person with Alzheimer's disease compared to another person with the disease. On an average, the affected person can live up to 8 years after the symptoms surface out, but depending on the rate of progress of the disease, the lifespan can extend to as long as 20 years.

Pathway That Contributes to Alzheimer's Disease Identified by Mayo Researchers
A defect in a key cell-signaling pathway in the brain has been identified by researchers at Jacksonville's campus of Mayo Clinic.
READ MORE

Research: Down Syndrome Helpful in Understanding Alzheimer's Disease
A new study suggests that the link between a protein associated with Alzheimer's disease and its impact on memory and cognition may not be as clear.
READ MORE