A novel plasmonic sensor device developed by scientists at the University of Illinois at Urbana-Champaign, enables early detection of biomarkers for many types of cancer and potentially for several other diseases as well.

What is the Need for Plasmonic Sensing Technology?


Currently, the diagnostic methods available for detecting cancer and other biomarkers, are capable of detecting only fairly higher concentrations of the substance, which tends to be a limiting factor in early diagnosis. A novel device developed by the current research team permits detection of CEA concentrations as low as 1 nanogram per milliliter.
Novel Plasmonic Sensor to Make Early Cancer Detection Possible


The current research team was led by Logan Liu, and Lynford Goddard, associate professors of electrical and computer engineering and the project was carried out by students Abid Ameen and Lisa Hackett. The team published their results in Advanced Optical Materials as a cover article.


The team chose CEA because most normal humans have at least 3-5 nanograms/ml and its occurrence in higher concentrations is an early indicator (biomarker) of many forms of cancer, including lung and prostate cancers.

"Cancer is one of the major causes of death in the United States as more than half of the new patients are diagnosed after it has already spread," Ameen explained. "This shows the gravity with which this problem needs to be addressed and this new design of a plasmonic sensor helps to detect the lower concentration of CEA at an earlier state."

More importantly, the current device is portable, cheap and simple to use, not requiring any expertise to use and make a measurement and can be used in the community setting. This would be especially helpful for patients who do not have access to a tertiary care center or a major facility. A finger prick blood sample is sufficient to carry out the test avoiding the use of a vial or tubes to collect the blood.


This device combines the properties of nanotechnology and a plasmonic sensor to enable detection of very low concentrations of the biomolecule with high degree of sensitivity.

The nanotechnology involved in the testing device is an array of metal nano cups or cavities. The wall of the cavity is composed of 2 layers of gold surrounding a central insulating layer i.e 3 layered. The test samples to be measured are placed within each cavity.

Unlike normal metal, which will not allow optical transmission, the nanocup structure allows excellent transmission of light and the cavity allows light to be stored within.

Gold is preferred as the metal for the nanostructure because it is inert and does not react with substances in the blood.

The wall of the cavity is coated with antibody to the carcinoembryonic antigen (in this current research).

If the blood test sample contains CEA, an interaction between the antigen in the blood and coated antibody will occur. This interaction leads to an increase in the refractive index of the immediate environment surrounding the nanostructure.

The plasmonic sensor measures the change in refractive index as seen by a corresponding change in localised surface plasma resonance (LSPR) wavelength. The shift in LPSR wavelength that can be measured by a detector will be directly proportional to the concentration of the substance in the test sample (CEA in this case).

"By combining plasmonic properties and the optical cavity properties together in one device we are able to detect lower concentration of biomarkers by light confinement and transmission in the cavity layer and from the top of the device respectively, based on the thickness of the multilayers and the refractive index of the cavity layer," Ameen explained.

.With this device, the light source can be an LED instead of a laser and a photocell or a camera image can be used instead of a high-end spectrometer.

What are Surface Plasmons?


Plasma is a mixture containing positive ions and negative electrons. The electrons rhythmically oscillate back and forth around the ions, and each individual electron movement is a plasmon.

Surface plasmons are those plasmons that are confined to surfaces and that interact strongly with light resulting in a plasma resonance wavelength shift that can be measured.

Potential Applications Of The Plasmonic Sensing Technology
To conclude in the words of one of the authors, "In the future, if they are made very cost-effective and portable," Hackett said, "it would be great to see people be able to take more control over their health and monitor something like this on their own." 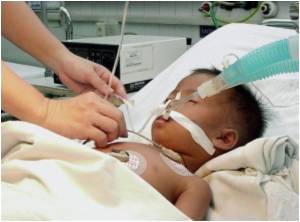 Ancient Roman Cup the Inspiration Behind The World's Most Sensitive Plasmon Resonance Sensor
A novel, ultra-sensitive tool for chemical, DNA, and protein analysis has been created by researchers at the University of Illinois at Urbana-Champaign.
READ MORE 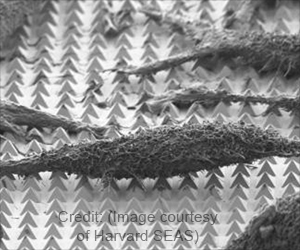 Novel Drug or DNA Delivery System Using Laser Activated Gold Pyramids
Laser-activated gold pyramids can cause temporary pores in the cell membrane to allow the passage of drugs and DNA into the cells.
READ MORE