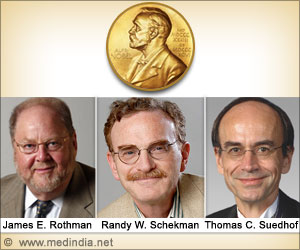 This year's Nobel Prize for Medicine and Physiology is being awarded to Drs. James E. Rothman from Yale University, Randy W. Schekman from the University of California and Thomas C. Sudhof from Stanford University, reveals a press release by the Karolinska Institute in Stockholm. The work done by these scientists helped to understand how molecules produced by certain cells are released and transported to other cells.

Cells produce certain substances packed in small bubbles called vesicles. For example, the pancreatic cells produce insulin packed in vesicles that is released into the blood. Nerve cells produce neurotransmitters in similar vesicles. These vesicles have to be transported to other specific cells where they can release these molecules so that they can bring about their action.

The honored scientists were responsible for decoding the mechanism of transport and release of substances from the vesicles.


Dr Randy Schekman studied the vesicle transport in yeast and discovered three classes of genes responsible in controlling the transport of vesicles to different compartments within the cell and to the cell surface.

Once the vesicle reaches its target cell, there are certain proteins which enable it to dock on this cell and fuse with the cell membrane of the target cell. Dr James Rothman discovered the protein complex that brings about this docking and fusion at specific sites during his studies on mammalian cells.

Dr Thomas Südhof studied the transmission of signals among nerve cells via neurotransmitters and identified proteins that bring about vesicle fusion mediated by calcium ions. His work enabled us to understand how the neurotransmitters are released from vesicles when directed to and at the right time.

Defects in the vesicle transport are responsible for a number of disease conditions including diabetes. The mechanisms as explained by these scientists will help in further research of such disease conditions.

Nobel Prize for Discovering the Structure of DNA Up for Auction
For discovering the structure of DNA, the Nobel prize awarded to Francis Crick in 1962 has been put up for auction by his family along with one of his lab coats, his books and other memorabilia.
READ MORE 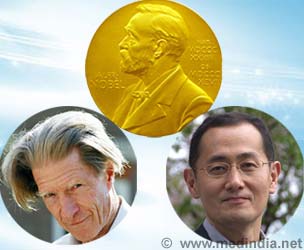