A research team from NYU Langone Medical Center has found that a drug which was designed to block the multiplication of cancer cells could also switch certain immune cells from lowering the body's attack on tumors into the kind that leads to amplification of immune response. The study was published in the journal Cancer Immunology Research and highlighted aspects of the drug nab-paclitaxel that were so far unknown.

The experiments were carried out on mice and the drug nab-paclitaxel, with a brand name Abraxane (protein-bound paclitaxel), entered the macrophages and altered them into mounting an aggressive tumor response. Dr. Dafna Bar-Sagi who is the Vice Dean for Science and Chief Scientific Officer at NYU Langone said that the study unearthed a role of Abraxane that was not associated with it till now. She further stated that these findings could be used to improve the drug and to include the drug in new combinations.
New Effect Against Cancer Identified in Cancer Drug

Paclitaxel is a drug used for cancer for over many decades and Abraxane is a combination of this cancer drug with nano particles of the protein albumin (nab). Paclitaxel is not found to be effective in the treatment of pancreatic cancer when it is used alone but Abraxane is a leading method of treatment of the disease condition. There have been many questions raised among the scientific community about how the drug that consists of the albumin is more effective in treatment.


‘New pathway of macrophage activation by abraxane (protein-bound paclitaxel) can be used to enhance therapy against cancer.’

Mode of Action of Paclitaxel

Cancer cells break-up microtubules inside the cells that aid in their multiplication. Paclitaxel does not allow these microtubules from breaking up which arrests cancer growth.

Mode of Action of Abraxane (nab-paclitaxel)

The nab-paclitaxel are also believed to primarily target the break-up of microtubules in cancer cells, with albumin aiding the drug in getting into the cells, resulting in lower toxic side-effects.

Apart from its effect on cancer cells, Abraxane also exerts its influence on macrophages that are present in large numbers in the blood stream. Macrophages are known to mount a strong immune reaction against invading bacteria and other microbes. These cells also recognize cancer cells and can mount an immune response. However, certain factors secreted by cancer cells are found to switch off these macrophages, from M1 cells into M2 cells, and prevent them from attacking the cancer cells.

M1 cells: Studies have shown that Type I macrophages (M1) can
M2 cells: These cells are responsible for moderating the inflammatory response by

In macrophage cell lines it was found that the albumin in nab-paclitaxel allowed the drugs to enter the macrophages through macropinocytosis which made this drug more effective than paclitaxel. Studies conducted on mice with pancreatic cancer showed that once the drug nab-paclitaxel entered macrophages, they changed from suppressing tumor response (M2 cells) into multiplying the immune response against cancer cells (M1 cells).

A postdoctoral fellow in Bar-Sagi's lab, Dr. Jane Cullis who is the lead author of the study said that the findings show that the treatment target macrophages by associating albumin with immune activating agents. This could give rise to drugs that alter the structure of albumin, making it last longer in macrophages. Alternatively, drug therapy for cancer could involve a combination of Abraxane with T cell therapy for better results. Such form of therapy will prove to be effective in treatments against certain tumors that consist of infiltration of a large amount of macrophages.

Macrophages infiltrate a large number of cancer cells in many different types of cancers and a system that aids in switching the type of macrophages into a cancer-fighting response could improve treatment of cancer. 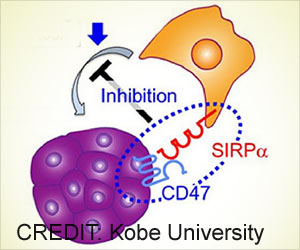 Link Between Cell Metabolism and the Spread of Cancer Revealed
Scientists at VIB and KU Leuven have discovered a crucial factor in the spread of cancer.
READ MORE

Mechanism Behind Pancreatic Cancer's Resistance to Chemotherapy Identified
A new mechanism that causes resistance of pancreatic cancer cells to chemotherapy has been discovered by University of Liverpool research team.
READ MORE